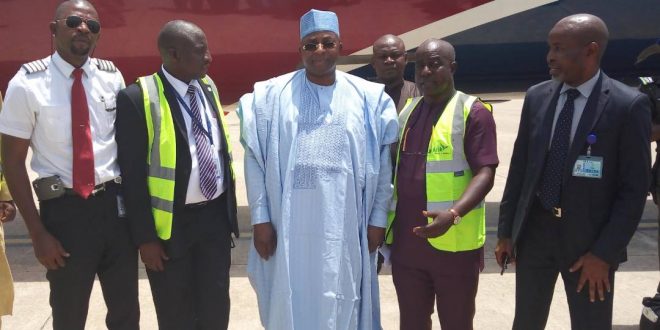 BAUCHI State Governor, Mohammed Abubakar has stated that there is no way tourism can be properly developed without having steady flights in the state and has described Arik Air’s foray into the Palace of Tourism as a fantastic development.

Arik Air today became the first airline to commence operations into Bauchi State after its Bombardier CRJ-900 touched down at the Sir Abubakar Tafawa Belawa International Airport by 12.40pm in Bauchi.

The governor who spoke on his way to Abuja onboard the flight stated that it was going to partner the airline and expressed optimism that the airline would break even on the route in a short time.

Governor Abubakar said,”Well it’s a fantastic development as far as we are concerned and there is no way you can be able to develop tourism without having steady flights in the state and tourism is one of the three major areas of comparative advantage we have chosen for ourselves and Government, so outrightly the coming of Arik is a fantastic development in the right direction and we assure Arik that we will collaborate with Arik.”

“I am very confident that within a short period of time. The route will take root if you like. It will take care of itself.”

On what the state has done to develop tourism, the governor said that it had gone far in developing the Yankari Game reserve to be a world-class resort facility and that seeing is believing.

He said,”I’d invite you to come to Yankari Game Reserve and see what is there. But from day one when I took over, I have had a relationship with yankari game reserve while I was growing up in the service of Bauchi state, I had a two-year stint with the state as legal adviser to the yankari game reserve.”

“I have a lot of Love for the place, it is about the first place I visited when from the time I visited we have been trying to upgrade all the facilities at the reserve. In addition, today we have an airstrip in the yankari game reserve which I have built, we have commenced the building of an 18 hole golf course in the game reserve to bring it up to speed to bring it up to par with resorts all over the world,”he said.

Also speaking to reporters about the inaugural flight, Associate Vice President Abuja and Regional Domestic North, Hamzat Bukar expressed optimism that there will be great and rapid development in the route especially due to its tourism imperative.

He said the airline had a synergy with the state government to showcase the state’s tourism.

According to him, Bauchi is potentially one if the most profitable routes in a few years to come and Arik is poised to make that a reality with its On time performance and professionalism of its crew.

“In Every business you look at the potentials, when we started Gombe, we started with few passengers today we have been there for nine years. The fact that Bauchi has opened up gives travellers from Jos, Maiduguri, Yobe and even Bauchi indigenes options. In the past you would travel an hour to Jos to connect Lagos from Bauchi .”

Nigerianflightdeck is an online news and magazine platform reporting business stories with a bias for aviation and travel. It is borne out of the intention to inform, educate as well as alter perceptions with balanced reportage.
Previous Odukoya files preliminary Objection to quash N1.7b SkyeBank charge
Next FEC approves N1.4billion to equip new control towers in six airports