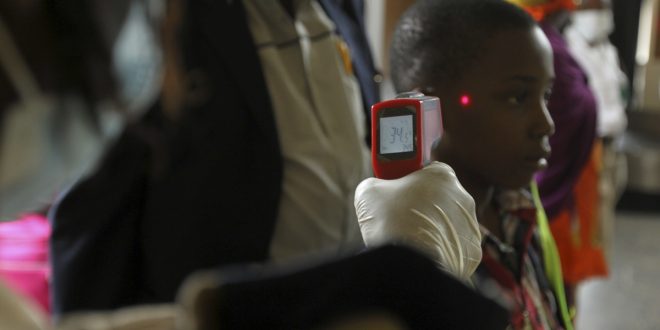 FG steps up surveillance at airports over Ebola resurgence

FOLLOWING the resurgence of cases of the Ebola Virus in the North east region of the Congo Democratic Republic, Federal Government has stepped up efforts to secure Nigeria’s major gateways including the Nnamdi Azikiwe International Airport and the Murtala Muhammed International Airport.

The World Health Organization (WHO) had on Friday, declared an Ebola outbreak in the Democratic Republic of Congo, saying that at least one person has been confirmed dead from the outbreak in that country.

Federal Airports Authority of Nigeria (FAAN), has assured Nigerians of adequate surveillance at the nation’s airports while stating that there is no direct flight from Congo to Nigeria, even as the authority assured that all preventive measures put in place at the airports were still intact.

According to FAAN’s Acting General Manager, Corporate Affairs, Mrs. Henrietta Yakubu, Port Health officials were at alert at all airports, adding that the authority also informed them of the need to increase surveillance.

“We don’t have direct flights from Congo, we only have from Rwanda, but I want to assure members of the public that we still have all preventive measures in place at our airports.

“There are sanitizers at our arrivals with the scanning apparatus called Thermal scanners being installed by the Port Health Services. The scanners have camera monitors that display pictures, aside the capturing of temperature, she said.

Yakubu noted that passengers still fill forms to ensure that everybody arriving the country through the airports are not potential carriers of deadly diseases, adding that “there is no cause for alarm.”

Nigerianflightdeck is an online news and magazine platform reporting business stories with a bias for aviation and travel. It is borne out of the intention to inform, educate as well as alter perceptions with balanced reportage.
Previous We renege on our story
Next World AIS Day aftermath: NAMA to accelerate AIM implementation