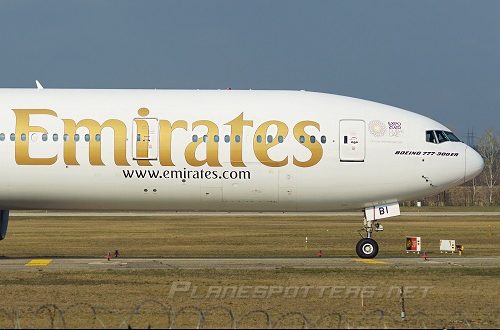 Updated: FG repatriates 256 Nigerians from UAE with Emirates amid jeers from indigenous airlines

NigerianFlightDeck 6th May 2020 Aviation News Comments Off on Updated: FG repatriates 256 Nigerians from UAE with Emirates amid jeers from indigenous airlines 251 Views

FEDERAL government has repatriated a first batch of 256 Nigerian nationals from the United Arab Emirates amid protest from domestic airlines in the country who insist they not only have the capacity to evacuate Nigerians but would be making something to keep their staff on as the COVID-19 induced recession lingers.

Meanwhile, a mild drama played out during the repatriation flight from Dubai as the aircraft had to make an air return 60 minutes into the flight, to disembark a mother who had delivered of a baby on board.

Nigerianflightdeck learnt that the Emirates flight EK783, a Boeing 777-300 with registration A6-EGO left Dubai for Lagos at around 10 am but had to return because of the incident and restart the journey.

A source close to the airline disclosed that the pregnant woman did not indicate her condition or how far along she was but that in the long run the airline did what it is supposed to for the passenger’s safety.

Meanwhile, Nigerian airlines joined their voice in the condemnation of federal government’s decision to patronize foreign airlines for the evacuation of Nigerians abroad describing the action as disappointing especially after it had made earlier statement that it would engage two domestic airlines to carry out the evacuation exercise.

A schedule released by the Foreign Affairs Ministry said the first batch of evacuees of 265 from Dubai would arrive Nigeria Wednesday, May 6, 2020, another 300 persons are to arrive from London on Friday May 10 on British Airways and on Monday, 11th May Ethiopian Airline would airlift those coming from United States of America.

In a statement signed by the Executive Chairman of AON, Captain Nogie Meggison, the body said that Nigerian airlines have the capacity to bring their countrymen and women back to their fatherland and expressed shock that a government agency would engage foreign airlines to evacuate Nigerians when the country has airlines that are capable of doing that.

“AON is shocked and disappointed by the decision taken by the federal government to evacuate Nigerians back to our country with foreign airlines. So we are calling for government to identify those officials who took such decision. At a time government is searching for ways to boost its revenue, some officials are giving away the country’s meager resources.

“Our rent is running, Internet is running. It is painful for government to bring out money to support aviation and some officials will be undermining government’s efforts. Azman has Airbus A340-600, which is a wide-body aircraft, Max Air has four Boeing B747 and Air Peace has three Boeing B777. So we have the capacity to airlift these Nigerians. Just imagine how the money earned will strengthen the operations of the airlines. Each aircraft has four sets of pilots. Their action does not add up,” Meggison said.

According to the body, these foreign airlines will not create jobs for the nation’s teeming youths and the federal government has made a call to employers not to sack their staff in the face of the current economic crunch caused by the Coronavirus pandemic, but queried how airlines can cope when the opportunity for them to make money and pay their workers were given to foreign carriers.

The Chairman of AON described the action of the officials who took the decision to engage foreign carriers to evacuate Nigerians as economic sabotage.

Nigerianflightdeck is an online news and magazine platform reporting business stories with a bias for aviation and travel. It is borne out of the intention to inform, educate as well as alter perceptions with balanced reportage.
Previous COVID-19: FG says aviation sub-sector to benefit from N2tr economic injection
Next COVID-19: FG extends ban to all foreign, domestic flights for extra four weeks