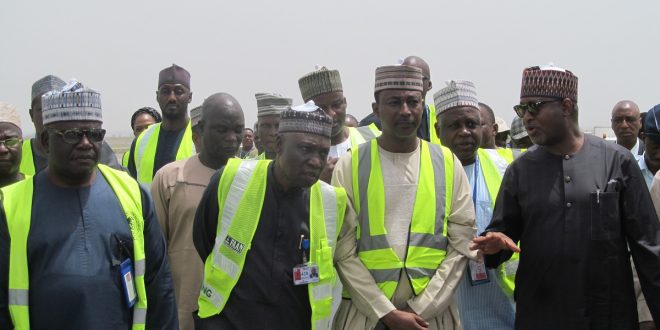 FEDERAL Government of Nigeria this morning ahead of its scheduled date reopened the Nnamdi Azikiwe International Airport (NAIA) to traffic beating the proposed April 19 deadline with the Minister of Aviation landing first on the runway.

The Minister, Sen. Hadi Sirika who landed from Kaduna Airport on a Nigerian Police aircraft with registration number 5N-HAR said there was no need for further delaying when the project had been delivered before the due date.

Sirika said: “April 19 was the due date to conclude and open the airport base on our program of work. We were able to deliver the project earlier than anticipated so we cannot open late. There is nothing wrong in opening it a day earlier.  Here we are, we set out to achieve a target and we achieve the target”.

Showing appreciation, he said, “We thank Allah for His benevolence. We are happy and thank Mr. President, His Excellency for his support, guidance and leadership. And I also want to thank my colleagues who did it all, the media and the Nigeria people for bearing with us during the time of the closure.”

Sirika continued, “The runway has been completed and it is in perfect shape. I just landed now on the same runway. Final exercise, the friction test was carried out this morning and they found out that it meets international standard, the International Civil Aviation Organization, ICAO’s Standard and Recommended Practices (SARPs). So the runway is good, perfect. The minister commented on why there is no celebration on the reopening of the runway. We are not celebrating because we set out a target and we meet the target. There is no need to celebrate”.

Ethiopian Airlines also became the first foreign airline to touch down at the Nnamdi Azikiwe International Airport after Six weeks of rehabilitation with its state of the Art Airbus A350-900.

Nigerianflightdeck is an online news and magazine platform reporting business stories with a bias for aviation and travel. It is borne out of the intention to inform, educate as well as alter perceptions with balanced reportage.
Previous Arik Air resumes flights to Abuja, recommences Maiduguri May 1
Next Overland Airways resumes Abuja flights today, commends Government on timely completion of runway repairs