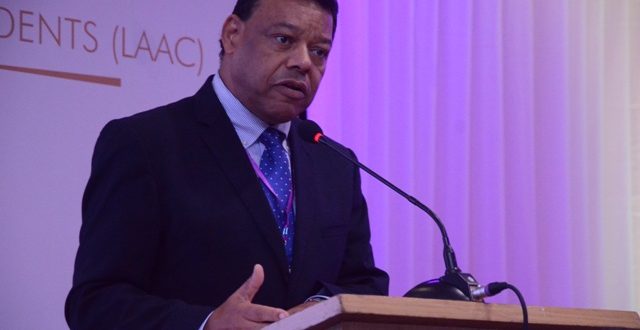 THE multi billion Naira Ibom Maintenance Repair and Overhaul (MRO) hangar can be of immense use if operators in the country pool resources to equip and use the hangar to maintain their aircraft o save them millions and curb capital flight.

Chief Executive of African Aviation Services Ltd, Mr. Nick Fadugba suggested the at the 22nd annual seminar of the League of Airport and Aviation Correspondents (LAAC),stating that the $100million facility is currently lying fallow 6 years after the hangar was commissioned by the then governor, Godswill Akpabio.

Fadugba who delivered a paper entitled ‘MRO Financing’ said he was filled with joy when the project which he described as ‘goldmine’ was launched but regretted that it had become a white elephant.

“I was filled with optimism when Akwa Ibom started the hangar, but it has been lying there for many years. And that is about $100 million invested in an empty hangar. Why haven’t Nigerian airlines come together? There is a hangar right there, why don’t they come together and get that hangar up and running? I am very sure Akwa Ibom State government will welcome Nigerian airlines saying, ‘right, let’s make this a Boeing 737 facility or whatever.’ It is an opportunity,” he said.

He said that the facility is a source of job creation and with a good business plan and collaboration with both local and international investors, the facility could be revitalised.

“The government needs to get someone or company to put a business plan together because they have a facility. So, they need the right business plan, the right management and investment to make it work. I believe that facility can be profitable and viable. At the moment it is a white elephant. There is no need for that when we are lacking MRO facility in Nigeria; it is a golden opportunity. When I look at Akwa Ibom, it is a tremendous source of jobs for the state and the youths. I really urge the state government to pursue that project and make it viable” said Fadugba.

He also stated that geographical location of the facility or airport is not a problem saying “it is a couple of hour’s flight.”

“Nigerian airlines are ferrying their aircraft to Europe for maintenance. Why can’t they ferry it to Akwa Ibom, what is the difference. If you have a facility there that can produce the job, I know the cost of labour will be much cheaper than in Europe. I believe that project is far-sighted, but the strategy did not succeed because there was no continuation, there was no follow-up. But now that it is lying idle and fallow, it can be revitalized, it can be made to work with the right business strategy and the right global contact in the MRO world.

The facility can also serve the West Africa market. You can imagine people ferrying their aircraft from West Africa to Akwa Ibom; it can be done. If anyone creates an MRO in Lagos or Abuja, the one in Akwa Ibom is gone. So, now is the time to move in quickly. You might say now you are responsible for a certain type of aircraft; we are going to be the champion for Boeing 737. Just look for the most popular aircraft type in Nigeria and focus on that before anyone else can start in Lagos or elsewhere,” he added

The breakdown of MRO markets indicated that North America had 30 per cent, Asia-Pacific 28 per cent, Europe 26 per cent, Middle East and South America 6 per cent each, and Africa a paltry 4 per cent within the period.
Airlines with MRO facilities in Africa are Air Algerie Technics, EgyptAir Maintenance & Engineering, Ethiopian Airlines MRO, Royal Air Maroc, South African Airways Technical and TunisAir Technics while Aero Contractors opened its MRO facilities for Boeing 737 classic aircraft alone about three months ago.

Fadugba was also if the opinion that many aircraft land in Nigeria with snags and other technical difficulties and that Nigeria can latch into that knowing there is a market that can fe exploited on the country.

Nigerianflightdeck is an online news and magazine platform reporting business stories with a bias for aviation and travel. It is borne out of the intention to inform, educate as well as alter perceptions with balanced reportage.
Previous Med-view boss says new national carrier is no threat to other airlines if..
Next PhotoNews:LAAC awards seven organisations, individuals for outstanding performance