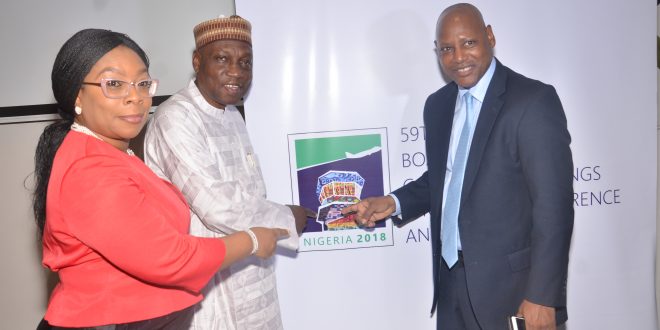 NO fewer than 300 delegates and participants from all over Africa and the world are set to arrive in Lagos, Nigeria as the Federal Airports Authority of Nigeria (FAAN) hosts this year’s Airport Council International (ACI-Africa), putting the country once more on a pedestal to attract foreign investment.

FAAN will be hosting the 59th ACI-Africa Board and Regional Committees Meetings and Regional Conference and Exhibition wher global and regional aviation experts and giants of the industry for over a week will share knowledge and experiences, develop strategies, form networks  and attract investments.

Managing Director, FAAN, Engineer Saleh Dunoma who made this announcement at Raddisson Blu Hotel in Ikeja at the Pre-ACI Briefing and  unveiling of the event logo said that the theme of this year’s conference “Business Transformation for Sustainable Development of African Airports” is apt as it tends to showcase the country’s potentials to the rest of the world.

The country will play host to the world from April 14-20, 2018 the trickled down effect of boosting tourism and enabling foreigners experience Nigeria, its beautiful people,  arts and craft.

FAAN MD who spoke on the event said,” Nigeria is currently seeking investments especially in the aviation industry and this conference will give an insight to areas where investments are needed.”

Speaking on the ACI Dunoma said FAAN has made a lot of strides since being part of that league and serving in the capacity as the ACI Africa President has ensured that Nigeria is in the limelight and has given the country an advantage in decision making as it relates to aviation matters in Africa and the world.

On achievements through the ACI Dunoma said, “Over the years, ACI Africa had focused on safety as a priority leading to the initiation of the world wide acknowledged Airport Excellence (APEX) in safety programme. This has recorded great achievements as there as has been a drastic decrease in the number of incidents and accidents in Africa.”

He stressed that through ACI assistance, Nigeria has gone through successful certification of both Lagos and Abuja Airports and has currently commenced APEX in safety programme of Port Harcourt, Kano, Enugu and Kaduna airports.

He said,”In Nigeria, ACI has been of tremendous assistance in the certification process of the Lagos and Abuja airports through the APEX in safety programme which helped us identify safety gaps in our aerodromes. In recognition of the role played by ACI and in FAAN’s bid to ensure safety in our airports, we have commenced the APEX in safety programme in other of our international Airports namely Port Harcourt, Kano, Enugu and Kaduna airports. ”

“I am pleased to announce that today is the inaugural day of the week-long APEX in safety review in Port Harcourt which will be closely followed by the APEX review in Kano. The safety reviews for Kaduna and Enugu will be carried out in May of this year. FAAN is engaging a proactive means of mitigating risks and ensuring the overall safety of our passengers,” he said .

Nigerianflightdeck is an online news and magazine platform reporting business stories with a bias for aviation and travel. It is borne out of the intention to inform, educate as well as alter perceptions with balanced reportage.
Previous Human trafficking: Immigration places officers on suspension
Next Ojikutu alleges figure manipulation in NCAA, calls for agency’s probe