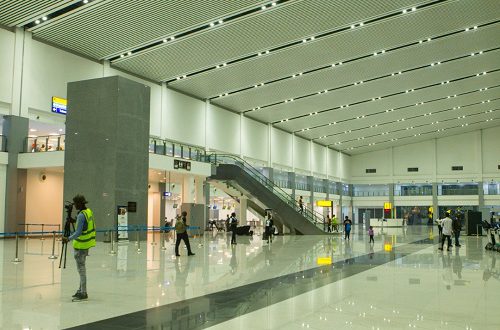 This is following the fact that Munich airport has successfully reopened its airport and has recommenced domestic and international flights, an experience worth sharing according to the Managing Director of FAAN, Captain Rabiu Hamisu Yadudu.

The meeting which was at the behest of the FAAN boss, Captain Yadudu aimed at assessing FAAN’s readiness to gradually begin operations, following the Federal Government’s directive for reopening of the four regional airports. Read also: NCAA confirms 5 airports approved for flight resumption

The meeting had in attendance the Munich Airport Expert Team, Herbert Keffel, Georgios Elkolids and Julian Duerdoth and was coordinated by Mr Fortune Idu, Managing Director of FCI International Ltd with Mrs Nike Aboderin, the Director of Finance as the team lead on the Nigerian side of 30 FAAN participants.

In initiating the meeting, Captain Yadudu had commented that ‘while FAAN is responding to the guidelines set by NCAA for gradual airport reopening and POST COVID 19 operations, it is important also to compare notes with other airports in the world to make sure we are on the right track and join the global industry in building back travel confidence.

Furthermore, FAAN intends to begin involving itself in route development and therefore, collaborative efforts between Munich and FAAN can help in that direction.

The presentation via skype simulated from Germany and England was tagged Rapid Aviation Plan by Mr Georgios Elkolids. Herbert Keffel highlighted the steps and considerations which Munich Airport International adopted towards the successful reopening of the airport.

Though there are guidelines issued by ICAO and ACI for the purpose of the reopening, the guidelines become more successful if they are adapted based on the peculiarities of the airport environment which Munich has successfully done.

In response to a question raised by Mrs Aboderin, FAAN Director of Finance on the issue of orderly management of human traffic in a relatively small airport space,the Munich airport team compared notes on how they have carried out flow management and social distancing orders with the FAAN team

In concluding the meeting, Mr Fortune Idu the coordinator of the meeting between Munich Airport and FAAN said he wants to see the formation of a development partnership between the two organisations for the betterment of the industry and to enable FAAN’s airports learn and aspire to operate high standards of airport services like Munich Airport. This will put some of Nigeria’s airports at the top of the region.

Nigerianflightdeck is an online news and magazine platform reporting business stories with a bias for aviation and travel. It is borne out of the intention to inform, educate as well as alter perceptions with balanced reportage.
Previous COVID-19: Akwa Ibom SG disburses palliatives to cushion Ibom Air’s N4bn losses
Next Rep Nnaji asks FG to release funds to aviation agencies to forestall industrial crisis