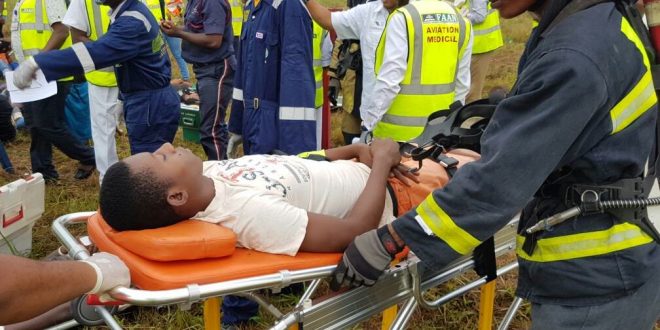 Archive Photo: Rescue personnel at work during the mock exercise at the Murtala Muhammed International Airport in 2017

AS part of efforts to enhance safety of lives and property during incidents and accidents, the Federal Airports Authority of Nigeria (FAAN) is set to review its Airport Emergency Plan (AEP) to minimise the effects of accidents as well as clarify roles and responsibilities of the various stakeholders in the event of any unfortunate incident.

The airport authority will round off the review with a mock exercise as is practiced anytime it embarks on such reviews.

In her welcome address, Mrs Victoria Shin-Abba, Regional General Manager, South West Airport, FAAN, said the AEP was one of the requirements of the International Civil Aviation Organisation (ICAO).

Shin-Abba said :” The objective of airport emergency planning is to anticipate the effects an emergency might have on life, property and aerodrome operations.

“It is also to prepare courses of action to minimise these effects particularly in respect to saving lives.”

According to her, it also clarify roles and responsibilities of the various stakeholders and establishes a mechanism for feedback and recommendations for programme improvement.

She noted that previous air incidents in the country had necessitated the need for all stakeholders to work together towards achieving the common goal of minimising the impact on lives and property.

Shin-Abba, charged the stakeholders to be alive to their specific responsibilities as detailed in chapter four of the AEP, stressing that this would help to reduce fatalities during air accidents.

Also, Mr Uche Igumba, Principal Airport Fire Officer, MMIA, said the AEP was set up in 2017 and was therefore due for a review to allow the stakeholders to make fresh inputs that would ensure better implementation.

Igumba commended the stakeholders for their support towards its success, noting that the MMIA had excelled in various mock safety exercises conducted in the past two years.

He added that they should, however remain vigilant because incidents and accidents were part of aviation and there was need to always be prepared to activate the emergency response plan.

Nigerianflightdeck is an online news and magazine platform reporting business stories with a bias for aviation and travel. It is borne out of the intention to inform, educate as well as alter perceptions with balanced reportage.
Previous International Operations: Senate heeds Onyema’s call, set to probe multiple designation
Next Ethiopian Airline says it’s exploring options to establish airline in Nigeria