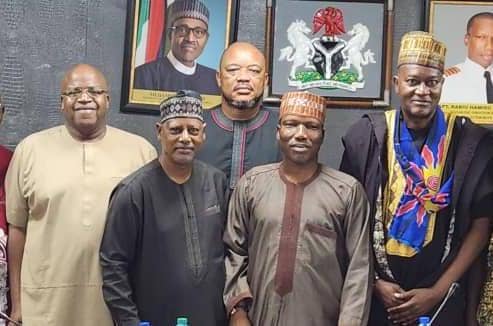 Federal Airports Authority of Nigeria ( FAAN) has inaugurated an aviation cargo roadmap development committee with a specific six point agenda all to address the challenges identified to be hindering our capacity in processing enough Cargo freighting in our Airports.

Managing Director of Federal Airports Authority of Nigeria (FAAN) Captain Rabiu Yadudu who inaugurated the committee on Sunday December 4 said the plan was to organise that aspect of the industry and move the country, currently at fifth to second in 2027.

The FAAN boss appointed Mr. Ikechi Uko Coordinator of the assignment stating that the Secretariat shall be domiciled with the Directorate of Commercial and Business Development of FAAN.”

“It is our belief that your road map guideline will be able to address the ways by which our aviation cargo processing and facilitation will increase in volumes to rank us among the first or at least the second in Africa before or by the year 2027, the FAAN boss said.”

“By our projections of 25% on year-on year incremental basis, we expect to be ranked first or second in Africa by or before the year 2027. With you, certainly, we can achieve this.”

According to him, the six-pronged terms of reference involves to articulate action plans that meet international best practice and assign timelines for facilitation of cargo processing at our airports.

It will articulate programs and incentives that will encourage mass participation of local airlines in domestic cargo facilitation.

The committee will also articulate mechanisms that will bridge the Turn-around time in cargo facilitation and articulate solutions to lack of adequate insurance coverage in the cargo value chain.

The FAAN boss further said the committee is to profer any other suggestions that may help the country achieve the desired goal in cargo business in our airports.

Nigerianflightdeck is an online news and magazine platform reporting business stories with a bias for aviation and travel. It is borne out of the intention to inform, educate as well as alter perceptions with balanced reportage.
Previous AIB-N begins transition to multi-modal transport investigation body, NSIB
Next Med-View cries foul as First Bank seals Lekki, Ikeja properties over alleged N4b debt