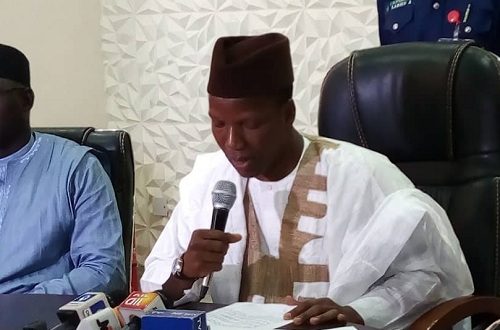 MANAGING Director of the Federal Airports Authority of Nigeria ( FAAN), Captain Hamisu Yadudu today identified the suspect apprehended by Aviation Security( AVSEC) as one Usman Adamu suspected to be from Niger Republic.

This is just as Captain Yadudu has said that FAAN would take full responsibility for the embarrassing incident of the Azman Air aircraft, 5N-HAI at the domestic terminal of the Murtala Muhammed International Airport Lagos yesterday.

The FAAN helmsman spoke in a press conference at the Mallam Aminu Kano International Airport Kano ( MAKIA) today while addressing the media on the unfortunate event that caused a stir in the nation 24hours ago.

According to the FAAN MD, the suspect who has been apprehended, detained was already apprehended by FAAN AVSEC around 10pm on the night of Sunday 14th of July 2019 within the Aerodrome premises.

He however promised that no stone will be left upturned to find those culpable for the negligence in the discharge of their duty and that they will be held fully accountable.

He said,” The suspect, identified as Usman Adamu suspectedly of Nigerien origin who claims to stay at number 1 Araromi street iyanu-ipaja on the 19th of July was reported to have appeared on the domestic end of the taxiway and attempted to gain access to the aircraft while it was taxiing to the holding point.

“The pilot alerted air traffic control and the message was intercepted by FAAN AVSEC control Centre who mobilized. He was apprehended, detained and is currently with the airport police command while our investigation progresses.

“The authority considers this incident a serious security breach and an air side incursion, this is unfortunate and most embarrassing bearing in mind the huge effort and resources deployed to the air side for airport safety.

Assuring the traveling public on measures to safeguard them, the FAAN boss reeled out some of the redundancies put in place to provide security and promised to sustain them while improving on what is.

He said, “FG through the ministry of transport and honorable minister of state aviation has also assisted in the award of contracts for the perimeter fences, which includes detection devices and CCTV cameras with infrared capacity for night operations in addition observation towers being erected this year to ensure proper coverage of the airport.

“We also have faan security patrol and there are also joint patrols that are conducted, FAAN AVSEC, the police and the Military this is done to guard the sanctity of our air side and ensure the security of live operations and the traveling public using our facility

“We assure our esteemed traveling public that these measures will be sustained, additional measures with regards to escorts and receiving of aircraft would also be intensified.

Captain Yadudu however admitted that with the way threats are evolving, sometimes the best laid plans get leaked and them the criminal elements provide counter measure but stated that it was up to FAAN to continuously improve on security measures.

“You do understand with security there are new and emerging threats daily and we are with all our stakeholders and the regulator, the NCAA in addressing this living security concern.

“I say living because every minute, every hour , every day security threats are emerging and changing. Sometimes as we try to do something it comes out they quickly adapt and sometimes they do it much faster, so we are working regularly with our stakeholders and regulatory NCAA in addressing this living security challenges.

He commended the Azman crew stating, “FAAN also recognizes and commends the very professional actions of the Azman air flight crew in preventing the safety issue from escalation. We hereby assure our stakeholders and Nigerians that FAAN is ready to eradicate these things from our airport.

Nigerianflightdeck is an online news and magazine platform reporting business stories with a bias for aviation and travel. It is borne out of the intention to inform, educate as well as alter perceptions with balanced reportage.
Previous Photo Reel: Who’s who at the LAAC Conference with other pictures of the week
Next NAMA splits Lagos Area Control Centre into two sectors