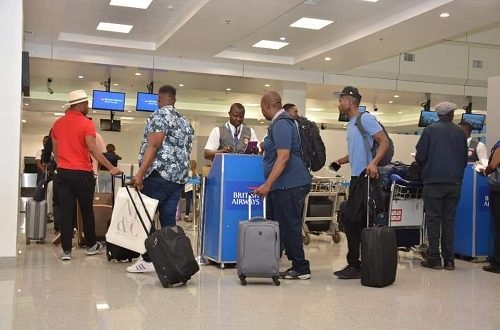 FAAN has stepped up measures against stowaways, airport encroachment-NCAA

REPORTED cases of encroachments on the airside and alleged aircraft intrusion in Nigeria has reduced to the barest minimum while issues of stowaways in and around the airport are being looked at to ensure Nigeria continues to maintain a high rating in terms of security.

Ag Director General of the Nigerian Civil Aviation Authority(NCAA), Captain Abdullahi Sidi who made this known at his office stated the Lagos and Abuja Airports have been upgraded security-wise to intercept or thwart any major security issue.

According to him, security networks in Nigerian airports are so impressive that the sole American airline, Delta Air Lines operating into the country would have ceased operations if the situation was reverse stating that they are spending much to audit the country’s apparatus quarterly.

He said,” the Transport Security Authority (TSA) of America comes to audit the Lagos airport almost every three months because it has interest as its aircraft flies its passengers into the country. Delta comes here and they don’t want anything to go wrong, it’s not that they look down on us, No! Anytime they come they give us very good score if we had not been passing, they would have stopped Delta from coming here, there are airlines going to America from Nigeria just this Delta and you see how they are spending money to ensure things are going on fine just to tell you that we are up and doing.”

Captain Sidi explained that Lagos and Abuja airports have consistently scored over 90 per cent in international security audits, stressing that the government was focusing on security and safety at the nation’s airports.

He said: “As much as we have some minor security issues, Nigeria airports especially the Lagos and Abuja, security-wise, we have achieved 96 per cent of the International Security Audit of our airports and if you remember, not long ago, Sen. Hadi Sirika, the Minister of Aviation, collected certificate from the International Civil Aviation Organization (ICAO) in Canada for achieving very high security standards at our airports.

“Every airport must have what is called perimeter fencing, which could be solid wall round airport, it could be solid wall with a buffer and sharp fence to stop intrusion into the airport environment. This is to stop pilfering and illegal entrance into the airports environment. Also, we have what we called the airside and the passenger side of an airport. The airside is supposed to be much more secured than the passenger side. I am happy to tell you that even the passenger side right now as it is are well-equipped with Closed Circuit Television (CCTV) cameras.

“So, it is difficult for any unlawful person to penetrate the airport without tracking the person. I hope you can remember the Abdumutallab era in 2009, he was tracked and even between then and now, a lot has improved in the system.”

On stowaways, captain Sidi explained the way it happens stating that it was being looked at.

“The way stowaways happen are from other airports. Airplanes coming in transit to Lagos. Someone that is desperate can do that and in fact most of all these stowaway people end up killing themselves. So if that person is desperate enough to kill himself he can do anything, he can follow an aeroplane from Benin, from Enugu or from Kano to Lagos. By the time it parks, he sneaks without people looking at him, because by the time passengers are coming down from the airplane, there is no security man standing there and looking at them, someone may pretend and say they are looking for their luggage and disappear into the bush.

“Now, he sneaks out and goes to the international side and now boards an international bound airplane and becomes a stowaway on that aircraft but unfortunately and ignorantly, he goes inside the wheel way where you have the landing gear thinking that it is large enough. Not knowing that after take-off once they raise the landing gear, that place is going to close and fly high altitudes where it is very cold so they freeze or get crushed so these are areas we are looking at them but security wise, we are doing well.”

Nigerianflightdeck is an online news and magazine platform reporting business stories with a bias for aviation and travel. It is borne out of the intention to inform, educate as well as alter perceptions with balanced reportage.
Previous Perimeter fencing keeps N60bn Bayelsa International Airport closed
Next FG appoints Olakunle Hassan NAHCON chairman, members