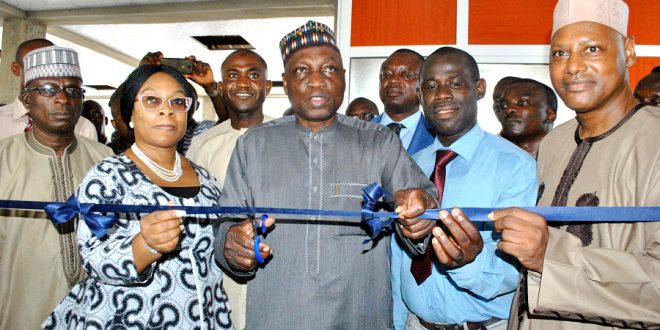 Dunoma who made this known today also said that the Port Harcourt International Airport is 80% complete and would also come online soon.

Dunoma who was guest to the League of Airports and Aviation Correspondents(LAAC) Gateway Forum also used the opportunity to commission the Saleh Dunoma Press Centre.

According to him, the airports have had some delays in their deliveries but that was due to some factors among which was the rise in exchange rate.

The FAAN boss said that when the contract for the terminals were awarded. The exchange rate was N165 to a dollar and that rose to over N300 to a dollar stating that that slowed work down but did not grind it to a halt as the contractors did not stop work.

” already we have gone far and by mid year, the terminals will be delivered. Especially Lagos and Abuja, if you have visited Abuja of late you will discover that everything is near completion, even the avid bridge are there now. In fact all that is left are the fittings and all those materials needed are on ground waiting to be fixed,” Dunoma said.

Dunoma we also spoke on the state of the runway at the AkanIbiam International Airport Enugu said that the runway was in order and was created with aqua planning stating that it cannot be over flooded as it is built in a way water drains out.

He further stated that there are conditions when the pilot would need the Air Traffic Controllers (ATC) to advise them on landing.

On revenue generation, the FAAN boss said that FAAN has some areas where they generate non-aeronautical revenue, but the authority was more concentrated on its primary objective, to provide airport services and facilities and so dwells on aeronautical revenue as they are straight forward revenues.

He said,” We do have areas where we generate non-aeronautical revenue but this is not the way some other airports have solely based the majority of their revenue generation on that and we are an airports authority and our primary function is to provide airport facilities and services, so we concentrate more on that. However, when we are done carrying out our aerotropolis project and hotels start rising around the airports as well as other revenue areas, then you can say we have joined other countries to make FAAN subsistence in non-aeronautical revenue.”

Nigerianflightdeck is an online news and magazine platform reporting business stories with a bias for aviation and travel. It is borne out of the intention to inform, educate as well as alter perceptions with balanced reportage.
Previous Ojikutu alleges figure manipulation in NCAA, calls for agency’s probe
Next Involve entrepreneurs, policy experts before signing AfCFTA; AON tells FG