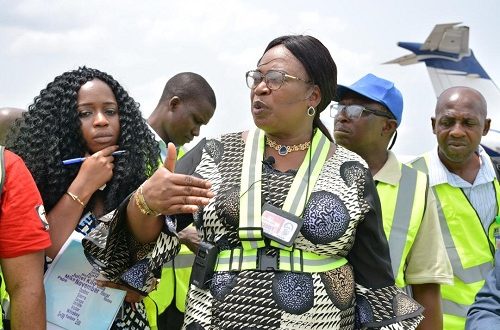 FEDERAL Airports Authority of Nigeria (FAAN) is enticing airlines who have aircraft parked at the Murtala Muhammed International Airport (MMIA) Apron, especially those parking perpetually at the aprons to aid in their relocation of their equipment to any airport of their choice with less traffic to create space for operating airlines.

South West Regional Airport Manager of FAAN, Mrs. Victoria Shin Aba made this appeal today while she toured the airport facility and explained the current situation the airport authority is grappling with while trying to create enabling environment for the airline operators.

Mrs. Shin Aba who explained that FAAN was building Aprons at both the International, Cargo and domestic said it was doing so at a pace but needed some quick intervention and that was why it became pertinent to call on airlines to take advantage of its offer to move their equipment to other airport without charge.

“At our cargo apron, the capacity is meant to take four aircraft at least two wide-bodied aircraft and two smaller aircraft at the same time. Once in a while we have more than capacity, once this place is filled up, we take the cargo flights to the international airport and that is additional cost to the cargo airline as they need to deploy and truck their goods from international to cargo.”

‘This is why we need to create space for airlines. On the left is supposed to be the expansion and we are on it. safety issues can also arise due to congestion which is what happens most times. The expansion is looking at increasing the cargo apron to accommodate eight (8) wide-bodied aircraft. So when work commences that is what we are looking at.”

On what FAAN is doing to create space before the aprons are built, Mrs. Shin Aba said, “We are reaching out to the airlines severally and not all the aircraft on the apron are unserviceable, some are very serviceable. We are talking to them and some are seeing our reason and we hope to continue the overture. This is why FAAN is willing to waive payment for them if they agree to take their parked aircraft to airports with less traffic.”

According to her, FAAN also needed to review its bye-laws that deals with the issue of aircraft parking stating that operators too need to give ample time to FAAN before they bring in their aircraft so the airport authority can sit with them and plan for the parking.”

She however said some of the airlines who own these aircraft have expressed certain fears especially of security, claims of maintenance but said these are things that can be worked around to aid growth.

Nigerianflightdeck is an online news and magazine platform reporting business stories with a bias for aviation and travel. It is borne out of the intention to inform, educate as well as alter perceptions with balanced reportage.
Previous UBA says N90m still up for grabs as it announces more winners for Wise Savers Promo
Next FIRS boss makes case for sustenance in VAT collection due to 44% increase in three years