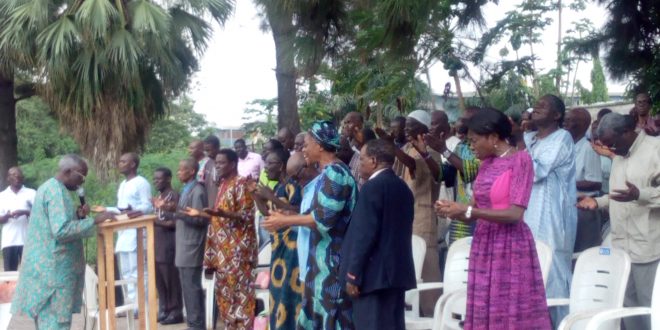 EX-WORKERS of the Nigeria Airways Limited(NAL)that have again expressed their dissatisfaction at the delay in the approved payment of N45b  severance benefits  by the Federal Executive Council and have accused the Ministry of Finance of delaying the payment.

Dr. Steve Mahonwu, Engineers Sheri Kyari were among the voices of the former workers who insisted that the bureaucracy the civil service is known for has hindered their payments which was approved eight weeks ago.
Speaking at meeting of the workers at the Skypower Catering Service premises in Lagos, Dr. Mahonwu one of the elders of the group and former chairman, Airline Operators of Nigeria, AON, said the ministry of finance is frustrating their efforts, a ploy he said is not funny.

” Bureaucracy, bureaucracy, that is the working term of the government civil servants, the president has approved, is there any follow-up, we have lost up to 30 people since the approval, they have been dying in quantum, we wrote to the president, the Vice President, the minister of state, aviation and the ministry of finance, when you write they reply you, it means communication is taking place but when you write, there is no response, it means they are in communicado” he lamented.
Mr. Sheri Kyari said since the airline was liquidated in September 2004, the ex-workers have had a bad experience with successive administrations except that of Late president Ya’adua who paid them five years of their pensions.
He said many of their colleagues have died and many afflicted with different types of ailments that required a lots of money to treat.

“We have had nasty experience with our governments over the years,minus the years of late of president Ya’adua who approved and paid us 5 years of our pensions, since then it has been a battle till this day to the extent that even when president Buhari campaign, it was an issue, so when they came in, they have been able to give approval for N45bn of the N78 million to be made paid to us which is equivalent to 10 years. Since the approval about also 8 weeks now, the payment had not been made so we are beginning to feel that people are beginning to politicking our fate”.

Many other ex-staff had more things to lament about stating that they were unable to cater for their family, pay house rent and cater for their health.
” we are tired, how can the president of a country approve money, so people so where are holding on to it, it is unheard off”
” sincerely, am not happy, I cannot pay my house rent, I cannot feed my children, am weak, am sick and tired, please, Nigerians help us”.
” that is why, we are begging the president to come to our aid so that we can get our money”.
” our people are dying everyday, we are not happy”.

It will be recalled that the federal government approved N45 billion for the payment of gratuities and other retirement benefits to the former staff of defunct Nigeria Airways after the FEC meeting 2 months ago.

The Minister of state, aviation Senator Hadi Sirika disclosed this while briefing State House correspondents at the end of the weekly Federal Executive Council (FEC) meeting presided over by Vice-President Yemi Osinbajo in the Presidential Villa, Senator Hadi Sirika, said following the approval of N45 billion by President Muhammadu Buhari, the Minister of Finance, Mrs. Kemi Adeosun, had been instructed to put the machinery in place for payment of the ex-staff of Nigeria Airways.

According to him, the ministry has consequently begun to put modalities in place for the payment of the retirees, regretting that some of them had lost their lives in the course of 20 years of waiting for the payment.

Nigerianflightdeck is an online news and magazine platform reporting business stories with a bias for aviation and travel. It is borne out of the intention to inform, educate as well as alter perceptions with balanced reportage.
Previous Airlines, passengers advised on hazardous weather as NCAA calls for adherence
Next NAMA to implement harmonisation of staff salaries