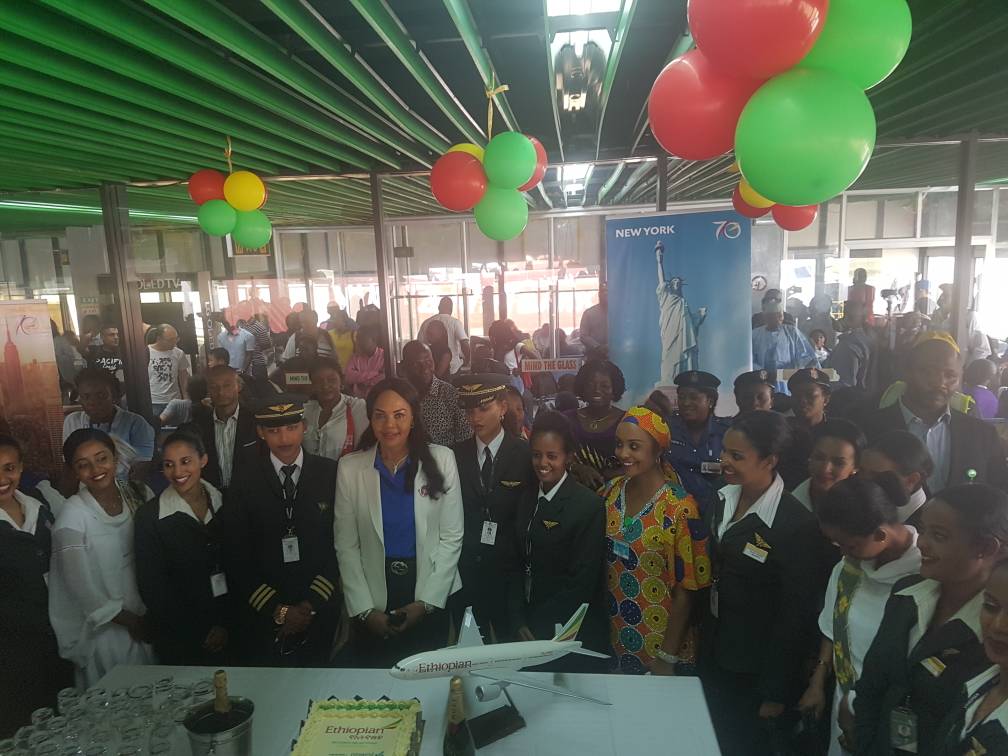 IT was cheers, chants of appreciation and applauds when Captain Endeganew Amsale Gualu on Saturday December 16, 2017 made history by operating the first all female international flight to Nigeria from Addis Ababa, Ethiopia.

Speaking about the flight before takeoff, Ethiopian Airline Managing Director International Operations, Esayas WoldeMariam Hailu said not only was the all female flight symbolic but is meant to imbue more confidence in the female folk showing that they can do very well when given the opportunity.

He said, “You know all of us in Africa our mothers, our sisters our wives but in our culture in Africa there has always been a long history of having them and at the same time looking down on them but we want to dispel that stereotype and show everyone that women can handle anything and everything including a high-tech machine like a new Boeing or Airbus to fly it, crew it, engineer it and to operate it so we just want to show that because, I was hearing some people say of Adam and Eve that Adam must be a white man because if he were African, he wouldn’t listen to her(laughs…). ”

“So our sisters can do better and we just want to show to our brothers in the continent that our sisters can do it. It also directly or indirectly shows of a public relations angle and even people on a gender cause will appreciate what we are doing. So that’s it, it’s an added advantage and we just wanted to show it. Even our mother Africa we call her a she and it is more affectionate.”

Chairman House Committee on Aviation, Hon Nkieruka Onyejeocha congratulated the crew of the flight describing them as ground breakers who are changing the narrative for women.

Onyejeocha said women were challenging the dominance of men in the industry and called on women in the country to encourage their daughters to go into the field.

” Women are moving forward, we are breaking grounds . We are not bank benchers , today we have pilots, cabin crew, engineers all female. It is an experience and it’s a great thing happening.”

Responding to reporters Captain Amsale Gualu sad,” my first African flight was historic and it was good. This is not my first international flight but it’s my first all female flight. And I am privileged to be part of this flight. I did not feel uncomfortable, not at all, that was a day to day experience.”

” it is my childhood dream, I have always wanted to be a pilot since I was a child when my father took me to the airport then when I was in high school I used to be impressed by the uniform and after graduating Addis Ababa university I joined Ethiopia Airlines as a first officer and flew Focker 50 and Boeing 767 and in 2010 I became a captain on Dash Q400 and from there a captain on 767 now I also fly 777 and 787.”

Also speaking at the short reception held in their honor, Nigerian Aviation Handling Company (nahcoaviance), Idris Yakubu said the company was proud of Ethiopian Airline for the feat.

Nigerianflightdeck is an online news and magazine platform reporting business stories with a bias for aviation and travel. It is borne out of the intention to inform, educate as well as alter perceptions with balanced reportage.
Previous Ethiopian Airlines boss, Esayas, makes strong case for liberalization
Next AFSMCS sets up mechanism against fraud, focuses on ongoing projects