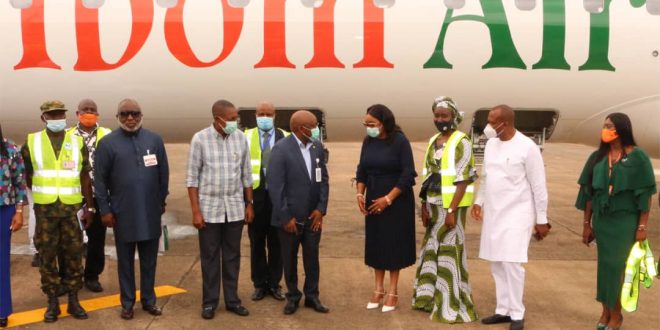 IBOM AIR today started operations into the Akanu Ibiam International Airport, (AIIA) Enugu from Lagos and Abuja with plans to solidify the route for the South Eastern and other connecting states as Enugu is the major gateway for the region.

This is just as the airline says the right aircraft usage, especially during this COVID-19 lull, is key to its survival and sustenance as an airline as its Bombardier CRJ 900s have been effective for them.

The airline which landed at the airport at 9:07am and was saluted by officials of the Federal Airports Authority of Nigeria ( FAAN) Aviation Fire Fighting and Rescue Services ( AFFRS) was welcomed by the Deputy Governor of the State, Dame Cecelia Ezeilo.

According to the deputy governor, the airline is a welcome partner and act as a catalyst to strengthen economic activities in the state.

Chief Operating Officer ( COO) of the airline, Mr. George Uriesi who spoke during the inaugural flight explained that the flight into the airport was planned as it will serve not just the state but adjoining states as well.

He said, ” Well we have come into the south east, we have moved from the federal capital to the commercial capital, Lagos to the Capital of Akwa Ibom, Uyo then we got into Calabar to get that part of the country and one we are in the south east, Enugu is the gateway to the south east and it’s got so many states that use this airport: there’s Ebonyi State, Anambra State, some parts of Benue State come here to fly up to Ogoja in Cross Rivers State so the clientele for this airport is huge.

“We are very happy to be here and we come with our usual disposition, schedule reliability, on time performance, excellent service that’s what we are about. And we hope that we provide that combination of three things to our customers they’d reward us and continue to reward us with their patronage,” he declared.

Speaking on Ibom Air’s aircraft type and how it has been beneficial to the airline especially during the restart that was initially riddled with low passenger traffic, Mr. Uriesi said:

“What’s important is that when you have the right equipment, if someone carries 60 passengers and it doesn’t work for him, we can carry 60 passengers and it will work for us. We burn far less fuel than those who fly the bigger aeroplanes, we have more reliability because the aircraft are relatively new and very well maintained. So far, it’s been good.”

Nigerianflightdeck is an online news and magazine platform reporting business stories with a bias for aviation and travel. It is borne out of the intention to inform, educate as well as alter perceptions with balanced reportage.
Previous LASG marks 2020 World Tourism Day on September 27
Next Passengers groan, Arik Air apologizes; as unions ground airline’s flights nationwide