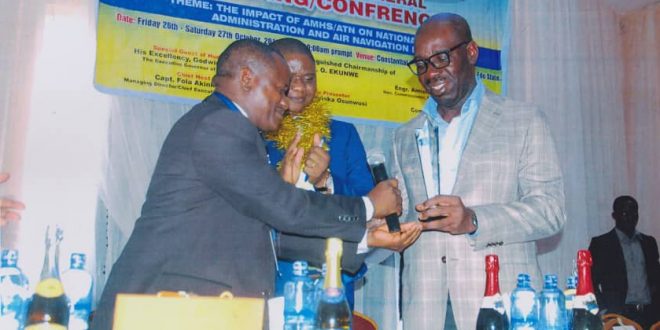 BENIN Airport may soon get landing facilities for night operations if the words of the Edo State Governor, Godwin Obaseki is anything to go by as he said government is working closely with the management of the Nigerian Airspace Management Agency (NAMA) to get it done.

Speaking as the Special Guest of Honour at the 5th Annual General Meeting of the National Airtraffic Communicators Association of Nigeria (NACAN) over the weekend in Benin City, Gov. Obaseki urged NACAN to support the government and people of the state to make Benin airport more viable with the commencement of night flight operations.

“I want to thank Capt Akinkuotu for the work he is doing in Benin airport, he has worked very closely with us to ensure that we have night landing facilities and ILS in Benin airport. That’s one of the reasons why I personally decided to attend this event to express the gratitude of Edo people to him and to NAMA for all the support ”

According to the governor, the Benin airport remained one of the first five airports in the country with rapid passenger growth.

Obaseki noted that the country with almost 200 million people create huge market for aviation with only about one percent traveling by air transport, still remained high in the continent when compared with other countries.

Obaseki charged NACAN members to avail themselves of the benefit of regular training to come up with the best practices to be abreast with happenings across the globe to proffer solutions to challenges in the aviation industry in the country.

The governor told NACAN members that much was expected from them by the government by working hard to achieve a culture of safety, regularity, efficiency and economic operations of the air navigation industry in line with the International Civil Aviation Organisation.

“Why we are working to improve on our air transport system, so much is requires from the air traffic Communicators, if out country is to achieve a culture of safety regularity, efficiency and economical operations of the air navigation industry in line with the provision of ICAO”

Capt Akinkuotu who was represented by his Technical Adviser, Engineer Ayodele Otitolaye said NAMA was committed to training and retraining for its workforce with the limit of available resources.

“This is why we recognize “Adequate and Skilled man power” as a vital ingredient for our success in providing safe, effective, efficient and economic air navigation services which is our mandate”

According to the NAMA boss, provision of relevant technology was important for professionals to perform their roles saying that air navigation facilities were capital-intensive but with the assistance of the Federal Government, a lot of new projects will be completed for effective performance.

Akinkuotu thanked Gov. Obaseki for his determination to ensure that the aeronautical Communication to flight safety was not broken and appreciated his support for the safety of airspace.

“Permit me to congratulate the national executive of NACAN and the entire delegate here present on this occasion. I also salute your collective display of resilience and determination to ensure that the linkage of aeronautical communication to flight safety is not broken. The works you are doing in support of safety in are Airspace is recognized and appreciated”

In his welcome address, the National president of NACAN, Comrade Nkambo George said the Federal government has engaged some staff in their department to boost manpower needs but requested go additional 50 staff on annual basis to make up for the shortfall as over 26 staff were disengaged this year haven attained retirement age.

According to Nkambo, 40 staff have been approved for their initial training at the Nigerian college of aviation technology Zaria by the Managing director of NAMA thereby addressing what used to cause tension, agitation and ill feelings among professionals in the agency.

The NACAN boss appealed to the federal government to look into the state of HF radios on 5872khz and 5879khz respectively which represented the North and Southern network for AFFN traffic exchange.

He thanked the Edo State governor for his support, hospitality and honouring their invitation and the Managing director of NAMA for his fatherly roles.

Nigerianflightdeck is an online news and magazine platform reporting business stories with a bias for aviation and travel. It is borne out of the intention to inform, educate as well as alter perceptions with balanced reportage.
Previous Elumelu, others insist entreprenuership will unlock Africa’s economic development
Next NAMA restores Air Traffic Services to Osubi Airstrip after Shoreline’s N31m payment