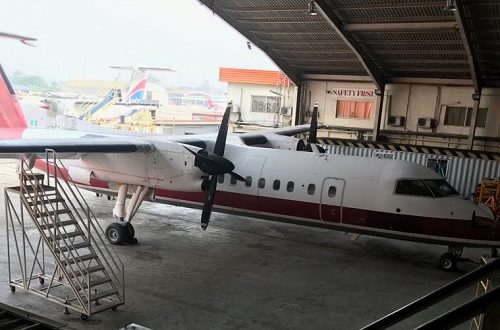 DESPITE a Federal High Court summons on the Nigerian Civil Aviation Authority (NCAA) and the Federal Airports Authority of Nigeria (FAAN) over contempt of court in the disputed ownership of two Bombardier jets at Lagos airport, filed by Top Brass Aviation, the court order is allegedly still being flouted.

The aircraft, two Dash-8 Q-300s with registration 5N-MSN 61TBB with 3 and 5N-TBC with MSN 614 , according to managing director of Top Brass Aviation, Roland Iyayi are still being tampered with at the Aero Contractors hangar despite a restraining order in 2015 which provided basis for the contempt charges.

However, a credible and highly-placed source in Aero contractors confided in Nigerianflightdeck that Aero Contractors as a company has no interest in the aircraft and are only ensuring that after the entire proceeding, both aircraft are still recoverable for whomever the court ruling goes to.

On Tuesday, January 15, 2019, Justice M. S Hassan; at the hearing of the contempt proceedings, ordered Director-General of NCAA, Captain Muktar Usman and FAAN Managing Director, Saleh Dunoma, to appear before the court on February 28, 2019

However, Iyayi who spoke to Nigerianflightdeck alleged that barely two days after lawyers of both the NCAA and FAAN, promised to provide their principals in court on February 28 for the hearing, that the two aircraft are still being tampered with at the Aero Hangar.

Iyayi expressed fears that at the rate that the impunity was being perpetuated, before the next date of the contempt hearing, the aircraft might have been worked on and ferried out since the NCAA DG, Captain Mukhar Usman and other parties served are still going about as if there was no court order.

Iyayi said,”As at today pictures are being sent to us on what is going on at Aero and we are taking that again as further affidavits to court, to tell the court that despite the fact that we had a sitting two days ago, which would have been a contempt proceeding sitting, they are still tampering with the aircraft at Aero Hangar which is in violation of the order. we are going back to court with all the evidence because it is not good enough to speak, the idea is to show evidence. And indeed anytime we filed in court we have shown photographic evidence.”

“As I speak, 30 minutes ago, someone under the aircraft told me they had removed the propeller from one of the engines, the engine stand was there with the view of changing the engine. Two weeks ago, the brake unit of this aircraft was removed and replaced, all of these reports were given to me and continue to be given to me by Aero Contractors staff, working on the aircraft.”

“We actually approached the courts when all these were happening to ask for an exparte order that the aircraft be taken away from Aero hangar, possession of aircraft taken by the police, the IGP, AIG Airport and Commissioner of Police Airport, to take physical possession of the aircraft, secure it at a location at the airfield and report to the court about the security and safety of the aircraft pending the determination of the case. But the judge felt since there was going to be the contempt proceeding in two days time,felt there was no need to do that and felt the contempt proceeding will deal with it.”

Our source who also explained Aero Contractors’ alleged role in the impasse, stated that there was an Irrevocable Deregistration and Export Request Authorisation (IDERA) and the the company was informed that the owners of the aircraft had invoked the IDERA to retrieve their aircraft and only brought it to Aero to revive before it is taken out.

An IDERA is a voluntary measure that provides greater security to creditors by preventing a debtor from flying an aircraft to a jurisdiction where the Cape Town Convention does not apply.

“We did not go to take the aircraft for any nefarious purpose, it was brought into Aero by a client, we checked the aircraft and found out it wasn’t Nigerian registered so we took the required steps needed to carry out this sort of maintenance and started maintaining the aircraft. A court order was brought to us in the course of this and we were asked to stop work on the aircraft. We have. All we did in everyone full view was to close the open panel to protect the aircraft from corrosion and so whoever wins the case, will have an asset.”

“It is in everyone interest and at Aero we have assured the aircraft is not going anywhere until the case is settled. However, we cannot pull out or move the aircraft because of the restraining order and in fact, a contempt order was issued to us and the Managing Director of Aero too, but if corrosion sets in, the aircraft would be a write-off so we were ensuring there is an asset left to recover at the end of all this,” the source told our correspondent.

Recall, Iyayi had told newsmen that Topbrass has invested over $12,000,0000 on the finance purchase agreement it entered into with Seagold for acquisition of the assets and had  not defaulted in the 24 month agreement period to give Seagold  unfettered access to the aircraft for repossession

The contempt order was filed against Seagold Investment Limited, a pilot with the Presidential fleet, one Captain Baba Mohammed personally , the Nigeria Civil Aviation Authority (NCAA), its Director General, Captain Usman Mukhar personally, Aero Contractors, Captain Ado Sanusi personally, the Federal Airports Authority of Nigeria (FAAN) all of whom must comply with the restraining order until the matter was settled.

Justice Hassan ruled that all parties must be represented at the adjourned date or he will issue a bench warrant as the case was a quasi-criminal trial and those served needed to be present for the hearing.

Nigerianflightdeck is an online news and magazine platform reporting business stories with a bias for aviation and travel. It is borne out of the intention to inform, educate as well as alter perceptions with balanced reportage.
Previous NNPC records 219 pipeline vandalism in October 2018, puts incidents at 42.9 %
Next NAHCO partners ICAN on capacity development, financial literacy