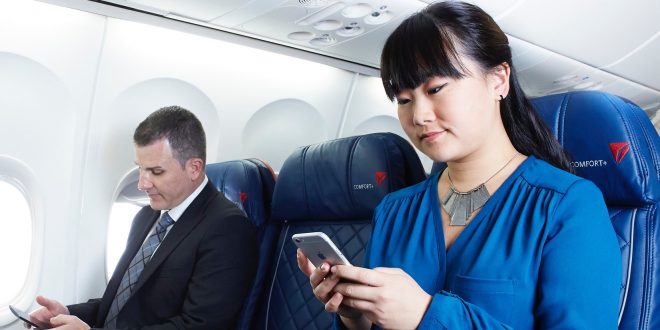 BEGINNING Oct. 1, customers on Delta Air Lines can text via channels of choice including iMessage, WhatsApp and Facebook Messenger from an airplane 30,000 feet in the air.

This news is coming just as the airline has appointed Shane Spyak as its new Staff Vice President of Sales for Europe, Middle East, Africa and India (EMEAI) who will oversee Delta’s EMEAI sales organization with a specific focus on the region’s broad commercial activities

On its new messaging innovation, the new, complimentary capability will enable customers to stay fully connected with those on the ground and exchange real-time messages in flight with friends, families, colleagues, and clients via iMessage, WhatsApp and Facebook Messenger. The enhancement is part of Delta’s multi-billion dollar investment in the customer experience.

“We know many of Delta’s customers want or need to stay connected in the air and on the ground, which is why we’re investing in an easy, free way to send and receive messages inflight through some of the most popular global platforms,” said Tim Mapes, Delta’s Senior Vice President and Chief Marketing Officer. “Coupled with our investments in seat-back screens, free entertainment and High-Speed Wi-Fi, free messaging is one more way customers can choose how to make the most of their time on Delta flights.”

Free messaging will be available on all Gogo-enabled Delta flights, including all aircraft with two or more cabins. Customers will be able to access free messaging through Delta’s Wi-Fi portal page, airborne.gogoinflight.com. Free mobile messaging will be for text use only and does not support the transfer of photo or video files.

In addition to mobile messaging, Delta continues expanding High-Speed Wi-Fi, seat-back entertainment screens and free entertainment to give travelers more choice and flexibility in how to spend their time from takeoff to touchdown.

Delta’s High-Speed Wi-Fi, powered by Gogo’s 2Ku Wi-Fi technology, is delivering next-generation technology that provides consistent, uninterrupted coverage anywhere in the world, including over oceans. Delta has the largest current fleet of Gogo 2Ku aircraft and the largest commitment to 2Ku of any airline in the world. Over the next two years, Delta is set to install over 600 aircraft with High-Speed Wi-Fi for domestic and international flights.

The airline’s High-Speed 2Ku Wi-Fi gives customers an at-home experience in flight, including the ability to stream video and use work-related networks, such as VPN, globally. Unlike prior versions of in-flight technology on Delta, customers may now use Wi-Fi from gate to gate on 2Ku-enabled aircraft. To date, the airline has installed 200 aircraft with the improved Wi-Fi technology.

On the appointment of Spyak as its new Staff Vice President of Sales for Europe, Middle East, Africa and India (EMEAI),the airline said the VPwill work alongside Delta’s European joint venture partners Air France KLM, Alitalia, and as well as Virgin Atlantic and will be based at the Air France headquarters in Paris.

Spyak joined Delta in 2006, and has held a variety of positions of increasing responsibility across the Global Sales and International organizations, including Sales Strategy, Sales Development, and Sales Operations. Prior to his promotion to Staff Vice President, he served as Managing Director – Latin America & Caribbean, overseeing all commercial activities in the region and playing a key role in building Delta’s commercial partnerships with GOL and Aeromexico. His strong background in sales, international business, and partner development make him uniquely positioned to succeed in his new and expanded role.

Making the announcement, Corneel Koster, Delta’s Senior Vice President EMEAI said: “We are delighted to have Shane drive our sales efforts in the EMEAI region. His expertise and proven track record will play a key role in shaping our sales strategy in collaboration with our European partners. Shane’s ability to work cross-functionally, combined with his entrepreneurial spirit, and customer focus will help strengthen Delta’s presence in the region and bring real benefits for passengers.”

Nigerianflightdeck is an online news and magazine platform reporting business stories with a bias for aviation and travel. It is borne out of the intention to inform, educate as well as alter perceptions with balanced reportage.
Previous FAAN assures of safety; as Nigeria celebrates independence
Next Overland Airways increases Akure-Abuja frequency October 3