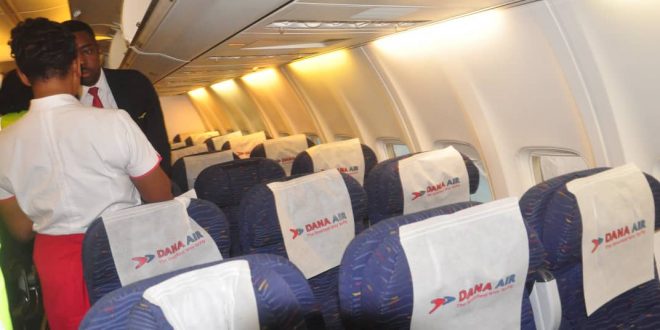 DANA AIR’S partnership with Togolese carrier, ASKY will see the airline operate with an all ASKY crew in collaboration with crew from Dana Air, making it a damp lease.

Further clarification in Nigerianflightdeck’s interaction with the Accountable Manager of the airline, Obi Mbanuzo revealed that he called the lease agreement ‘a complicated wet lease’ and stated the ASKY aircraft will operate with Dana Air’s call sign, Dana in-flight services and catering and even the entire interior of the aircraft is branded Dana.

“We are flying those airplanes and adding more. Aircraft and pilots on board are ASKY’s and in the back we have cabin crew and they have theirs, it’s a damp lease. But the pilot flying might be from ASKY but he is Nigerian, who knows he may want to stay (laughs), ” Mbanuzor said.

He also revealed that the current deal with the Togolese airline was a stepping stone to greater and better things as Dana has aircraft going through rounds of certification before being introduced into the market.

He said,”There are aircraft currently registered under Dana name as the owner that nobody has seen yet, they are currently undergoing the necessary checks, the work being done on them needs them to conform to our regulations in Nigeria, we are working very hard with NCAA and there has been progress.”

“This (ASKY partnership) is a temporary solution to ease us into the permanent solution of the fleet augmentation, we have the MDs they are good aircraft but they won’t last forever we’ve flown them for 10 years from inception Dana has flown them. We currently have four of which two are currently in France,” he said.

Nigerianflightdeck is an online news and magazine platform reporting business stories with a bias for aviation and travel. It is borne out of the intention to inform, educate as well as alter perceptions with balanced reportage.
Previous Bi-Courtney ‘blackmails’ industry over recall of 20 sacked workers as unions prepare for showdown
Next NAMA insists TRACON facility is in order, debunks lack of spares claim