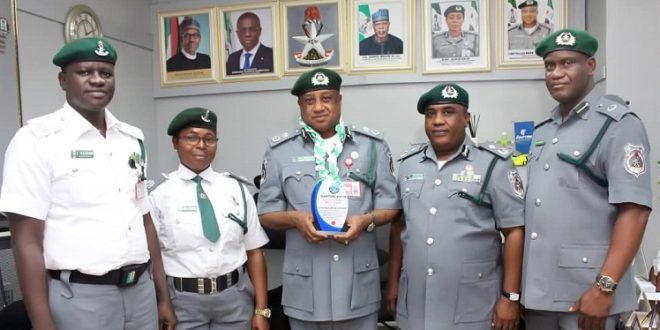 Customs Area Controller, Comptroller Mohammed Malami Gidado with his award flanked on either side by his team

Customs MMIA rakes in N7bn on 100 days; calls for synergy with sister agencies on leakages

The November figures, according to the command saw a significant increase of “Three Hundred and Fifty Million, Five Hundred and Thirty Five Thousand, Seventy Six Naira and Twenty Four kobo (₦350,535,076.24) only in the revenue collected compared to that of October 2022.

The Customs Area Controller, Comptroller Mohammed Malami Gidado made these known recently after one of the MMIA, Nigeria Customs Service stakeholders honored him with the “Excellence in Diligence Merit Award” stating that the month of November 2022 was another productive month in the annals of the Command.

According to a comparative analysis of revenues generated same time in 2021, the NCS said it collected the sum of Six billion, Seven hundred and sixty three million, Nine hundred and Seventy nine thousand, Two hundred and Seventy Naira and Sixty Two kobo (₦6,763,979, 270.62) only in the command.

Speaking further, the CAC enjoined sister agencies at the MMIA to collaborate with the Nigeria Customs Service to ensure blockage of all possible avenues that may result in revenue leakages.

On how most of the feats were achieved, the NCS boss stressed that since he took over the mantle of leadership and enacted a “Seamless Clearance Procedure ” of passengers’ accompanied and unaccompanied baggage it has improved facilitation and aided greater service delivery.

“The CAC in October this year assured and still assuring all voluntary compliance persons a good travel experience in the clearance of their shipment and would like to make known to the public today Thursday 08 December, 2022 that there has been a positive difference in the integrity of passengers’ declaration of goods in the preceding Month (November 2022) under review.

He continued,”Once again, we assure all voluntary compliance persons a good travel experience and friendlier clearance procedure of their shipment.

The Nigeria Customs Service mandate includes Interception of contrabands, examination of travellers and their baggage, cargo and mails; assessment and collection of Customs duty and other statutory taxes on goods and services as well as protecting businesses against illegal trade malpractices with the application of extant laws such as Sections 150 and 161 of the Customs and Excise Management Act CAP C45 Law of the Federal Republic of Nigeria 2004 ( CEMA CAP C45 LFN 2004) for the smooth running of the command.

Nigerianflightdeck is an online news and magazine platform reporting business stories with a bias for aviation and travel. It is borne out of the intention to inform, educate as well as alter perceptions with balanced reportage.
Previous Court reaffirms status quo as Nigeria Air proponents fail to set aside AON injunction
Next Irrespective of vaccination status, Nigerian Government eases off COVID protocols for travellers