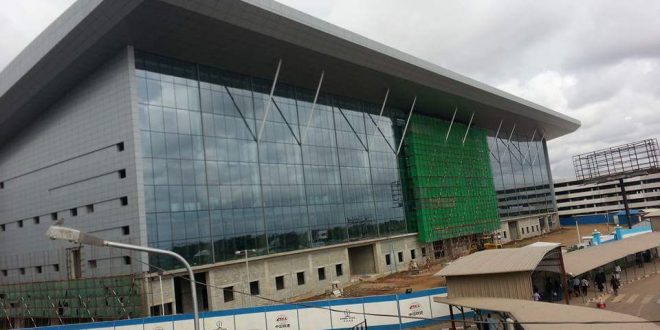 Concession will grow our airports in leaps and bounds- Sirika

NigerianFlightDeck 11th September 2016 Analysis Comments Off on Concession will grow our airports in leaps and bounds- Sirika 1,132 Views

WHEN the Minister of State, Aviation, Senator Hadi Sirika came to Lagos to wade into the imbroglio concerning the embattled Aero Contractors, little did he know he would find himself pitted against the Nigerian media, as the corps of media men barraged him with questions pertaining the planned concession of the four major airports.

According to the Minister, the Murtala Muhammed Airport, Lagos; Nnamdi Azikiwe Airport, Abuja; Mallam Aminu Kano Airport, Kano and the Port Harcourt Airport have all become eyesores and due to the current lack of finance government can no longer invest meaningfully into these airports, thus the need to concede these airports.

According to Dr. Anne Graham, University of Westminster, London in her research, Fundamentals for Airport Privatization and Concession Policies; concessions are private company/consortium which have concession to operate all or some assets for fixed period (usually 20-30 years) in which at end of concession in theory airport is handed back to government but an annual fee is usually paid to government and there may be a guaranteed level of investment or service quality.

This is favoured by many governments as they keep ownership of the airport.

When government concedes its airports to private investors, it  means government will relinquish management to the investors who automatically become responsible for developing the airport and making sure it measures up to global standards, in the area of operational efficacy and profitability of the airports .

One fear however that has militated against the idea of concession in Nigeria is the secrecy behind them and the fact both concessioner and concessionaire, government and private investors, do not come to a mutually beneficial agreement like the case of the Murtala Muhammed International Airport when it gave control of the airport’s Terminal 2 to Bi-Courtney Aviation Services Limited (BASL).

So government should look at doing business with established airport operators, like Ferrovial which the United Kingdom concessioned Heathrow to in 2006, Fraport  and others who have done some clean concessions without the controversies.

Sirika was quite decisive when he said that the concession must happen given the fact that government does not have the funds to invest in these airports and make them better.

According to him, the airports have dilapidated so bad that it would take a major investor to come in and turn it around stating again that the facilities were so poor and that government do not have funds to invest in them thus the plan to concession where the airports will be given out for a period with investment being put in it while government will earn from it until the period the concession elapses and then it is returned. “We no longer have money to put in public property but we will not sell or privatize as social democrats all we can do is to concession them so as to grow them. And that we will.”

Given the present run of things, these airports have been one embarrassment or the other, and it is one of the major factors that have given rise to need to concession these airports.

From the countless power outages at the MMIA leading to many embarrassments to the country, to the inconducive environment at the MAKIA, all these airports at various times have been a source of mortification and all of this is as a result of lack of funds to invest In these facilities.

The cables at the MMIA are so old and are always burning and sending the airport into darkness for hours and sometimes days, if the funds were there, a brand new terminal would have been the best bet but as government has said, there are no funds to invest.

Airports are supposed to be the major gateways to any country and if built and maintained properly, they will be the cynosure of all eyes especially when they are able to provide comfort, seamless facilitation and adequate services delivery to the passenger who uses these facilities but our airports have lacked investments so long they are an appalling sight.

Operations at Nigerian airports have worsened so badly that users, wait in suffocating check-in areas with dysfunctional air conditioners. This is a situation that is not acceptable, as it does disenchant foreign investors which the country is begging seriously for especially at this time of economic recession.

Taking all this into account, Sirika said the concession of the four major airports first, which will be followed by the concession of another six cargo-designated airports, will attract the private sector who are willing to invest in airport development, stating that there was no point in holding on tight to the facilities when government does not have the resources to develop the infrastructure

“You see government has no plans whatsoever to sell national assets but it was sheer misconception to see the unions on the street demonstrating what they thought was sales of the airport. The airports will be concessioned, the big four and then later six of the cargo designated airports and this will help us not just grow and expand the sector but put us in the right path to again be established as a hub.”

What planned concession will achieve

On what this planned concession will achieve, the Minister was optimistic that the yield will be far better than what the country currently enjoys especially as Nigerians and visitors to the country are hardly enjoying any benefit as it stands.

Citing examples with the airports in Dubai, the United Arab Emirates (UAE) and Doha, the Qatar airport he said those airports were aesthetically built not as an airport but as attractions, operating at maximum capacity and always improving.

He said apart from the magnificent structure, they had Spars, shopping malls and other super markets but lamented that in Nigeria airport terminals, what passengers see are cigarette and liquor shops, adding that the present government will not allow the terminals to remain like that.

The minister added that reports had shown that 40 per cent of passengers prefer to pass through airport terminals with excellent facilities, adding that duty-free in Dubai is about $1.2 billion, a situation not obtainable in Nigeria.

“You see airports like Dubai, Doha people go there just to see the airport or shop, the magnificence of that airport is attractive on its own. People go there to use their amazing duty frees where you get spars, malls and the like but what do we have in our duty-free? Cigarettes and alcohol with concession we can change that and make our airports the cynosure of all eyes.”

“And concession will not only achieve aesthetics, right now our airports are in so sorry a state that they cannot handle aircraft like the Airbus A380 or the Boeing 787 dreamliner but if we get this right which we will, today we are doing 15million annually, in the next five years we will be doing 70 to 100million annually and you will see the impact once we do things right.”

He argued that a well planned and executed concession will grow the industry in leaps and bounds.

Taking out the Controversies

According to the Minister who said he was sad to see the unions on the street marching against the concession, said they were ill-informed and that government was not privatizing the airports but concessioning them to make them better and operate better.

The issue of concession has not sat well in the aviation sub sector especially with the concession of the Murtala Muhammed Airport two (MMA2) which was shrouded with all sorts of secrecy like the official secret act, a concession that is now generating all forms of controversy and is making both industry players and keen watchers shudder at the thought of any concession. A concession viewed as a failure because of the need to be revisited to ensure a solid concession plan.

However as a result of that, Sirika just last Friday kick-started the concession process inaugurating two committees; a Project Steering Committee, and a Project Delivery Committee.

Sirika, who performed the inauguration in his office, said the Project Steering Committee with him as Chairman, is to provide the general direction, and steer the course of Public Private Partnership project concessions in the Aviation Sector.

Among the Committee’s Terms of Reference are:  Approval of technical, financial and legal framework for the successful preparation and execution of the concession, provision of policy guidelines and general direction on all matters relating to PPP and concession of projects and programs in the Aviation Sector; consider and facilitate necessary permits, clearances and carrying relevant stakeholders along in the processing of PPP / Concession matters;   Approve action plans, budgets and financial requests submitted by the Project Delivery Committee; as well as serve as the final decision-making body on PPP/Concession matters on air transport generally.

With the right regulatory frame-work, the current challenges and controversies of the MMA2 concessions can be avoided

Rwanda’s has recently signed deal with a Portuguese construction firm to build the country’s biggest airport. According to the pact, upon completion, the company will run the facility’s operations for 25 years after which the government takes complete ownership. Unlike the BASL concession which has an agreement of 12, 25 and 36 years respectively without anyone knowing which is real.

The bid to expand Arturo Merino Benitez International Airport, in Santiago Chile under a 20-year concession, yielded an astounding 77.56% fee.

New York–LaGuardia (LGA) drew an enthusiastic crowd of bidders as well, with the Skanska-Vantage consortium coming out on top. Given the nod as the preferred bidder back in May, financial close of the deal is expected in the first half of 2016.

Announced in late 2014, Fraport’s successful bid for 14 Greek regional airports has faced a series of delays in reaching a binding agreement. The 40-year, €1.2 billion upfront concession deal was finally announced in mid-December 2015.

When in full effect, it will generate an annual fixed concession fee of €22.9 million for the cash-starved Greek state. Fraport is also obliged to invest at least €330 million into capital infrastructure by 2020.

Vietnam’s IPO for a 25% share in Airports Corporation of Vietnam – operator of 22 airports in the country – also garnered intense interest. A total of 152 investors, including 16 institutional players, were in on the action, raising $49.6 million, which the government has earmarked for the development of Long Thanh International, a new Greenfield airport that will eventually replace Ho Minh City’s existing Tan Son Nhat International Airport.

Other concessions in the works include the Philippines the bidding process for Bacolod-Silay, Iloilo, Laguindingan, Davao and New Bohol (Panglao) airports is well underway. The instruction to prospective bidders was issued to five pre-qualified consortiums in June, with bid submissions and awards expected in the first quarter of 2016.

While, in the UK, an announcement is expected soon on the future of London City Airport, with majority shareholder Global Infrastructure Partners (GIP) looking to sell its 75% stake in the gateway for upwards of £2 billion.

Nigerianflightdeck is an online news and magazine platform reporting business stories with a bias for aviation and travel. It is borne out of the intention to inform, educate as well as alter perceptions with balanced reportage.
Previous FAAN graduates 211 AVSEC, fire officers
Next Late Hadiza Lantana Oboh: Ex-Nigerian Airways pilot murdered in cold blood