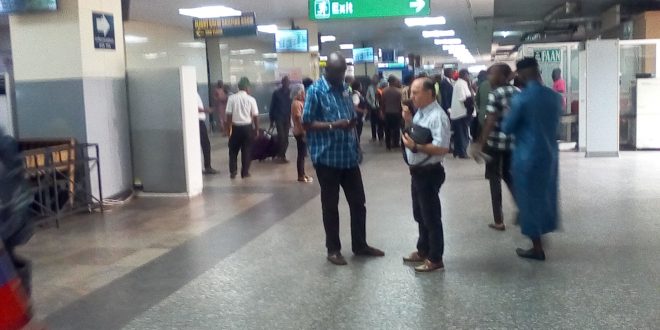 This is the first stage of what is meant to be a total overhaul of the cooling system as the airport authority plans to extend the chillers to the Departure Wing as soon as possible to give passengers the right experience.

Nigerianflightdeck learnt that the newly installed chillers were commissioned February 12, 2019 and have been immediately put to use.

During a visit to the terminal, our reporter observed, unlike before, that the chillers were working at optimum and surprisingly watched as workers around the Arrival D and E as well as people around the lobby  clad themselves in cardigans.

In recent years, there has been hues and cries with regards the heat that emanates from the terminal, causing passengers who just arrived the country to complain bitterly.

However, with the installation of the chilling system, this seem to have changed.

Passengers arriving the terminal via Kenyan Airways and RwandAir reacted to the new chill that greeted their arrival especially those who were frequent travellers.

One passenger who identified himself simply as Daniel spoke to Nigerianfligtdeck outside the terminal said the cooling system was a welcome development but urged the airport managers to ensure that it is maintained and does not go bad.

“Look, my brother, I have travelled this airport on numerous occasions and this is the first time in years that I step out of the aircraft and feel like I am still in a lush environment. In fact I feel the same sensation as if I’m still in the aircraft and although this is quite nice, they need to maintain it so it doesn’t get bad. Maintenance is key.”

Our reporter also learnt that apart from plans to extend the chill to departure that other works are ongoing  including the change of the ceilings as well are relighting of the terminal.

Nigerianflightdeck is an online news and magazine platform reporting business stories with a bias for aviation and travel. It is borne out of the intention to inform, educate as well as alter perceptions with balanced reportage.
Previous AIB releases preliminary report of VP helicopter crash, issues two immediate safety recommendations
Next Kabba Helicopter Crash: Caverton assures of safe, reliable operations