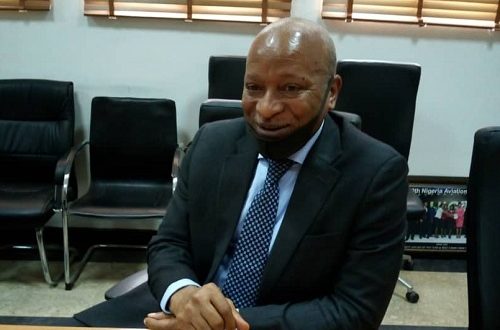 CHIEF Executive Officer (CEO) of Arik Air, Captain Roy Ilegbodu has said that the Asset Management of Nigeria (AMCON) owned airline NG Eagle is an entirely different entity from Arik Air as there is no connection between both airlines.

This is just as he has called for the installation of runway light on the Murtala Muhammed Airport Runway 18L in Lagos stating that installation of lighting will save airlines a significantly huge cost which affects their entire operations.

Speaking to reporters earlier today in his office, Captain Ilegbodu explained that the fact a couple of planes with Arik aircraft livery were painted to the NG Eagle colours  was because the assets were mortgaged for a loan and now the owners have taken possession of their assets. Read Also: Two NGEagle aircraft arrive Nigeria as airline primed to enter market

According to him, the owners simply recovered their assets.

He stated, “Well, in reality there is no connection between the two. That said, you are aware that NG Eagle is solely owned y AMCON and of course you know that Arik Air itself is in receivership and the receivership was instituted by AMCON which is based on the fact that Arik owes significant sums of money to AMCON. So if you can infer from there that’s the relationship.

When quizzed on the Boeing 737NG aircraft with registration marks 5N-MJG and 5N-MJN he said: “I can boldly say that those airplanes in our industry we call what happened with it recovery. So they have been recovered. If a company owes and it cannot pay, those airplanes were actually mortgaged to AMCON and it is very clear that at some point they’d take their assets and that is what was done.”

“So, the fact that the aircraft carry the name and logo of Arik Air doesn’t mean they (the aircraft) belong to Arik Air. The owners have taken their property. Of course, the opportunity was given to Arik to pay; I don’t think that happened so I think it’s pretty straight forward by law, those are mortgaged assets and the owners of the assets have every right to take their assets.” He explained Arik Air set to be rebranded; renamed Nigeria Eagle

Speaking on the absence of air field lighting on Runway 18 Left, Captain Ilegbodu explained that it has added significantly to all airlines cost, including Arik Air stressing that apart from Jet fuel burning which adds extra cost on the airline, there is the wear and tear factor that increases the cycle

He said, “There would be significant sums of savings; I can’t even begin to quantify. It is actually a huge drain on not just Arik but all the other operators that have to do night operations. That can be resolved by installing the Runway lights at the local runway but yes huge sums of money can be saved. An airplane cycle starts when you start the engine and you are burning fuel, the wear and tear on the engine. So for every cycle, it doesn’t matter if that cycle is from here to Benin or from here to London or from here to the US, it is one cycle. So it costs money and that cost is the same whether it is London or Dubai, it is one cycle, it is one cycle.” Read also: Runway 18L/36R: Grueling 13 year pain without Air field lighting at MMA

“For instance the engine when it is brand new, you say it has 20,000 cycles of life and so you fly 1000 cycles every year, that means that you expect those engines to run for 20 years at 20,000 it goes to zero you cannot use those engines until it goes back to shop for overhaul and those materials that are time related are replaced, those cost for us are much. So that trip for us from the international airport, 10 minutes sometimes more across runway, it’s something we calculate daily anytime after six you know that that is additional cost for the airline.”

He stressed that as an airline operator, anything that brings savings to an airline Arik will likely pursue vigorously and that installing lighting on the runway is one sure way.

Nigerianflightdeck is an online news and magazine platform reporting business stories with a bias for aviation and travel. It is borne out of the intention to inform, educate as well as alter perceptions with balanced reportage.
Previous FG replaces emergency travel certificate with new temporary e-passports
Next AIB retracts Air Peace’s tyre burst on landing statement; cedes investigation to NCAA