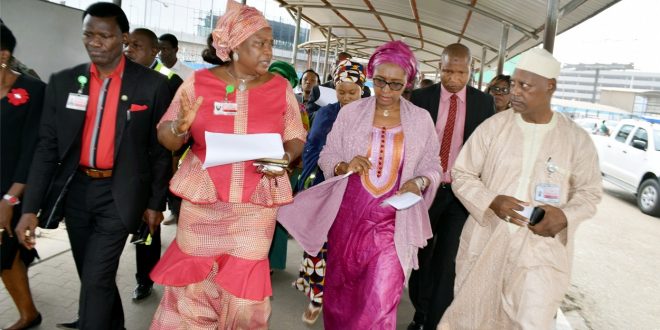 AS part of efforts to see how government resources are utilized and understand challenges faced in implementation of government action in the aviation sector, Minister  of State, Budget and National Planning, Mrs Zainab Ahmed has expressed her satisfaction  with projects around the airport.

Ahmed particularly identified that she has also seen the upgrade of the airport that shows an improvement with the state of the arrival hall of the Murtala Mohammed International Airport, (MMIA), Lagos, commending Federal Airport Authority of Nigeria (FAAN) for a job well done.

Mrs Ahmed made the remark yesterday at the airport in Lagos during her one-day tour of the airport facilities.

According to the Minister, there has been an upgrade that shows an improvement in passengers’ experience, especially on the arrival hall of the MMIA. 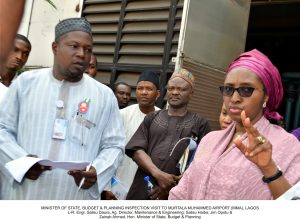 On the essence of the tour, Mrs Ahmed said the reason why they were at the airport was to inspect the projects under the FAAN.

“The reason why we are here is to inspect the projects under FAAN. The essence of this is to see how well government’s resources are utilized. To also see and understand the challenges that the airport is facing so that when resources are to be allocated or disbursed, we will do it with the understanding of how they are to be used”, the minister said.

Mrs Ahmed noted that her team will be writing a report and indicate what they have observed and also share the report with the authority for them to see what has been recorded as a result of the visit.

On the level of on-going projects at the airport, the Honourable Minister said “We have seen a number of projects at different levels of completion. We have seen a lot of good work that has been done. There are some projects that are suffering as a result of number of different challenges. We have also seen the upgrade of the airport that shows an improvement in users’ experience, especially on the arrival of the MMIA”.

Mrs Ahmed further pointed out that, it is very evident that “we need to do a lot of work to upgrade the departure area of the airport. The luggage handling process is very problematic. It is largely manual and as a result of that, customers spend hours before getting their luggage. That needs to be addressed”.

Confirming that some of the reports on the projects given to the ministry tallies with what is on ground, the minister, however, pointed out that progress has been made and a lot more still needs to be done.

Nigerianflightdeck is an online news and magazine platform reporting business stories with a bias for aviation and travel. It is borne out of the intention to inform, educate as well as alter perceptions with balanced reportage.
Previous Ore calls for sack of DG NCAA, says he has performed below bar
Next NSE Council approves Med-view Airline’s listing into stock market