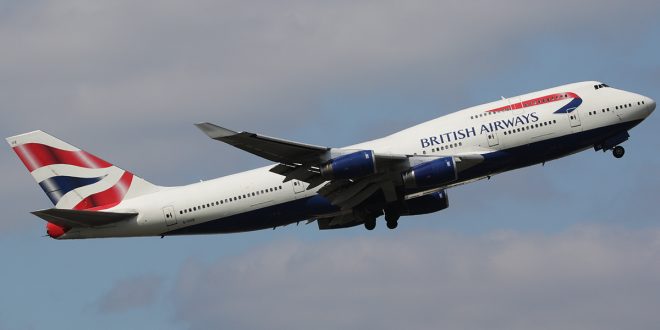 BRITISH Airways is re-introducing the Boeing 747 to Lagos effective 01 September 2017. Fondly referred to within BA as the ‘Super High J aircraft’, the Lagos Boeing 747 will boast of 14 Seats in First class, 86 in Business class, 30 in world Traveller Plus and 145 in World Traveller.

The aircrafts are larger than the Boeing 777s which the airline currently operates and will add an extra 343 seats a week on the busy route between London and Nigeria’s commercial Capital-Lagos.

As well as a refreshed interior, with the look and feel of British Airways newest aircraft, and state-of-the-art entertainment system, the revamped 747s also have a larger Club World cabin with 86 lie-flat beds and choice of the upper deck cabin for our dedicated Business customers.

Kola Olayinka, British Airways commercial manager in Nigeria, says: “We know customers who fly in these aircraft will appreciate the improved interiors, with their mood lighting, updated seating and the new entertainment system.”

The aircraft are equipped with Panasonic’s next-generation eX3 entertainment system, which will give customers a choice of over 1,300 hours of entertainment, including more than 130 movies and 400 TV programmes on larger, high-resolution screens, with touch and swipe functionality, giving the system the familiar feel of using a tablet.

As part of the upgrade, customers in World Traveller Plus will now have access to a universal power socket at every seat, capable of accepting plugs from the UK, US and Europe. In addition, World Traveller customers will have their own USB sockets to power phones and tablets.

New seat foams have been installed in World Traveller and World Traveller Plus to increase customer comfort and updated seat covers fitted to match those on the A380 and 787.

Seats on the new Boeing 747 service go on sale from today. The flight numbers and schedule will remain the same with BA75 departing Heathrow at 11:30 and landing in Lagos at 1755. The return service operates as BA74, leaving Lagos at 22:55 and arriving at Heathrow’s Terminal 5 at 05:25 the following morning.

British Airways has also launched its multi-million-pound investment plan to benefit its customers with a focus on excellence in the premium cabins and more choice and quality for all.

Four hundred million pounds will be spent on Club World with an emphasis on improved catering and sleep, and a new seat in the future. At Heathrow a First Wing check-in area with direct security and lounge access has launched, and lounges around the airline’s network are to be revamped and improved. The Club Europe cabin has also been introduced on UK domestic services and all customers can look forward to the latest generation Wi-Fi across British Airways’ long-haul and short-haul fleets over the next two years.

Nigerianflightdeck is an online news and magazine platform reporting business stories with a bias for aviation and travel. It is borne out of the intention to inform, educate as well as alter perceptions with balanced reportage.
Previous Air Peace debunks report alleging delayed flight was caused by FIRS boss
Next Air Cote d’Ivoire receives first A320 aircraft with onboard Wifi