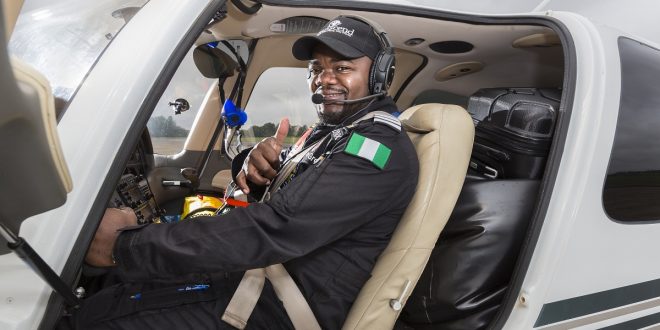 Captain Ademilola Odujinrin and his aircraft, the upgraded Cirus SR 22

Believing in dreams: Captain Ademilola Odujinrin relives his journey around the world

“IF flying 9 months around the world has taught me anything, it is to be determined, never to give up no matter how the odds are stacked up against me and that is the same encouragement and motivation I pass on to our youth. I embarked on this dream to change the narrative for Africans for Nigerians in particular, and this is what  we at transcend are doing” words from Captain Ademilola Odujinrin the first  African to fly Solo around the world.

IN a media parley today, Captain Ademilola Odujinrin spoke in details about his experience in embarking on his round the world flight, he emphasized his challenges, his motivation as well as  lessons to be taken from his feat.

Captain  Odujinrin who just completed his most amazing journey becoming the 114th pilot to fly  around the world explained that the flight which was meant to last a six-week period, was elongated further to 9 months due to constraints unlimited to finance and certain technical difficulties.

This however, did not deter him as the plan was to fulfill his childhood dream of flying round the world even as he was transfixed on the streets of Lagos with his kite in his hands looking at an aircraft pass to its destination, he knew he was in love with flying and wanted to fly around the world.

Lola , according to his narration, was not a blue-blood and even as he chased his dream after he went to the United Kingdom, he did not have 800 pounds to train as a commercial pilot and so he would go to school every evening and work a nine to five the rest of the day to achieve his dreams.

He became a pilot and even while flying both as first officer and captain, he kept on rehashing his dreams to fly around the world, which most colleague though was just crazy talk until he was linked up with Transcend Project Director Ladi Ani-Mumuney.

The captain had initially planned his successful round the world trip to commence from Nigeria but after months of scouring the country with his team and meeting various sponsors who would eventually back out or show no commitment, he eventually took off from Washington District of Columbia (DC) and made his trip round the world and back to Washington DC.

According to his itinerary, Captain Odujinrin flew into 25 countries and made 35 stops in his 9 months sojourn on his  upgraded Cirus SR 22 aircraft  powered only by sheer determination, guts and the will to succeed he set out to do the black continent proud.

His 25 countries and 35 stops included in no particular order the commencement from the John Fitzgerald Kennedy Airport Washington DC flagged of by the Ooni of Ife, His Royal Highness (HRH) Oba Adeyeye Enitan Ogunwusi who was exceptional in his encouragement of the young pilot to achieve his goals.

According to his narration, from Washingon DC he flew to Canada, Iceland, Scotland, London, Valencia in Spain, Malta, Rome, Greece, Egypt, Djibouti, Oman, Pakistan, India, Bangladesh, Thailand, Singapore, where he said the weather was most challenging as he was stuck in South east Asia for 2 months owing to the rains.

From there he flew to Indonesia, Bali, Australia, Port Villa, Pego Pego, Christmas Island, Hawai before he travelled 14 hours nonstop across the ocean to California, Texas before he arrived his final destination of Washington DC.

Captain Odujinrin said,” My challenges  were majorly a lack of financial backing but more than that is the fact that backers withdrew after months of leading you to believe they were interested but that also challenged my sense of self belief it made me fight harder to show that if we believe we will achieve and that is just one of the few messages to the youth, to believe in their dreams and not be deterred by discouragement.”

“ It would have been the greatest honour for me to start from my country Nigeria,  but I had to start from elsewhere because investors did not believe this was possible, I am not blaming anyone giving the economic situation and all but all that lack of believe led the team and I to source funds elsewhere and so start elsewhere.”

Nigerianflightdeck had reported on June 10, 2016, during this trying time for this amazing pilot that finances and logistics hindered the initial start off and that due to lack of sponsorship  and other logistics that could cut the cost of the flight including fuel, the flight may takeoff from Washington DC.

In fact at that point through extensive investigation, Nigerianflightdeck discovered and reported that it was cheaper to start flying  from the United Kingdom the United States or even the United Arab Emirates as the cost of Jet A1 is far cheaper in those areas than what you get in Nigeria and even some potential backers were asking ‘what is in it for me?’ and that hindered the project.

“ I never set out with the Guinness Book of Records in mind, I only wanted to inspire the masses to do amazing things, to tell the kids ‘ you can change things, you can achieve your dreams,’ just be focused and determined.

On what next for this pilot that has put Africa and indeed Nigeria on the world map, “I am actively involved in innovative ideas to help the youth believe, an environment where you can,’ against all odds’ achieve your dreams. It would be nice to have a Nigerian company believe in and fund these kinds of projects but none of them did in this case but we take a lesson from that and the lesson is there are many great things out there and we (as a people) are stopping amazing things from becoming reality and so the corporate worlds also has to dig in and get involved better to help create that enabling environment for dreams to be actualized.”

Nigerianflightdeck is an online news and magazine platform reporting business stories with a bias for aviation and travel. It is borne out of the intention to inform, educate as well as alter perceptions with balanced reportage.
Previous FAAN introduces new measures to check touting, others at cargo/hajj terminal
Next NCAA moves to strengthen economic regulations, trains 50 DATR personnel