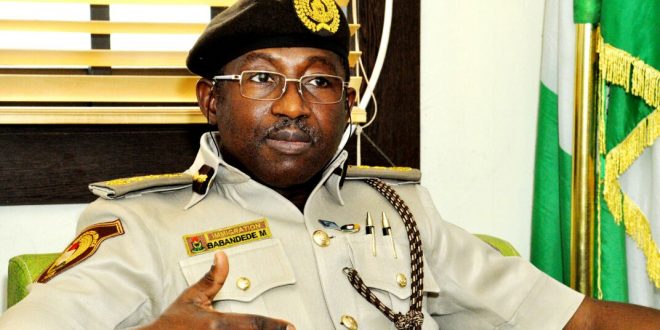 COMPTROLLER GENERAL of the Nigeria Immigration Service (NIS), Muhammadu Babandede has cleared the air following reports rife on social media concerning the alleged deportation of a Nigerian national travelling to the United Arab Emirates (UAE) over the new Enhanced e-passport stating it has been rectified.

Babandede who was responding to questions at the closing ceremony of the Nigerian Immigration Service 2019 Retreat said Immigration had made samples of the new passports available to all embassies since March and many Nigerians have travelled far and wide with it.

He said foreign affairs was in charge of ensuring a hitch free delivery of samples to all countries.

The CG said,” I want Nigerians to appreciate that these passports have been launched for a very long time and Nigerians have travelled everywhere with it. I’ve travelled for hajj with it and I passed through Dubai, I used Emirates. Dubai is not the only country in the world, there was a hitch of delivery probably from foreign affairs because we don’t make contact directly to the embassy. Samples have been issued since March. Passports have been issued through foreign affairs since March we have sent out the samples and specimen to all countries through the Ministry of Foreign Affairs.”

“I’m glad we have sort it out with Abu Dhabi, it’s not even Dubai people who take Emirates do not have this problem, those that have problems are the aircraft going to Abu Dhabi but that has been sorted out, there is only one country we don’t have issues with the document and foreign affairs have sorted it out with the embassy of the United Arab Emirates, this has been rectified so it’s not our fault,” he said.

Meanwhile, reacting to the 48-hour directive for travel documents to applicants, the CG said It was a mandate NIS have been given and the agency will do all in its power to comply especially when it surmounts the challenge of booklet unavailability.

“I explained yesterday(Friday) to the honorable minister, the greatest problem we have for inability to comply with the 48-hour directive is the lack of booklet. I assure you if they start producing we will do our best, especially in the new places. You know we have started rolling out the passports in Ikoyi, most places have the passport booklets, in two weeks we will roll out in Kano

“But what he said is,’ If there are no problems and that has been the directive of Mr. President under Executive Order 01: that if fix your timeline, if there is problem get back to the applicant, this is why we are doing the retreat. We want to be able to create connectivity, we want to encourage people to pay online.

“After capturing that is the beginning of the 72 hours and if we cannot deliver we should be able to call in or send a text message stating the particular reason. If there is no booklet we should be able to say it, or if your finger print didn’t capture well or the document you submitted is bad or you have already got another passport, it has been rejected. It is expected of us by order of the Minister and Mr. president that we respond. If there are issues, we should be able to identify this and apologize. There has to be contact between us and the customers,” he said.

On border security and the partial closure, the Immigration boss described it as a welcome step by Mr. President stating that it has given the service the drive to streamline its activities along the border, apprehend wanted suspects and heighten security as entrants are expected to come in through the recognized borders with the right travel document.

“To immigration, the border drain which led to this partial closure is very important. One: it ensures people to pass the recognized entry portals. Even our ECOWAS members have been told to come to Nigeria anytime they wish but they must come through a recognized point of entry, provided you have the right travel document.”

Nigerianflightdeck is an online news and magazine platform reporting business stories with a bias for aviation and travel. It is borne out of the intention to inform, educate as well as alter perceptions with balanced reportage.
Previous Events that sparked activities this week in pictures
Next Oil and gas: SON adopts ten American standards to boost industry for Nigeria