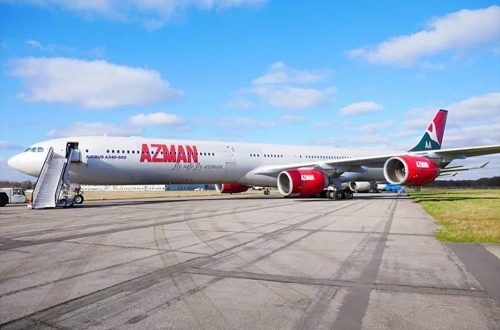 Azman Air sets for hajj, other international routes as A340-600 touch down at MAKIA

AZMAN Air on Thursday took delivery of its 6th aircraft, an Airbus A340-600 double-aisle plane at Malam Aminu Kano International Airport stating that the new equipment would boost the airline’s capacity largely to enable it go into full commercial service on the Umra and Hajj route.

The President of Azman Group companies, Alhaji Dr. Abdul-Manaf Yunusa Sarina who spoke on the arrival of the aircraft said:

“The aircraft we had before and this Airbus 340-600 would boost the operational capacity of not only Azman Air, but also Kano state as well as Nigeria at large. This new plane and the other ones if arrived, would contribute to reaching new international destinations as well as the existing destinations, the domestic destinations”.

“This is a great development to Azman Air, because we’re now witnessing a comprehensive arrangement to modernize our services to travelers, and to meet the aspirations of the Azman Air, which would put Azman among the best airlines in the world,” He said.

“This new A340-600 will go into full commercial service on Umra and Hajj route from, I therefore called upon our customers to always patronize with Azman, as we pledged to sustain our excellent services to them,” he added.

According to him, Azman Air followed the company’s decision to develop the strategic partnership with other career institutions around the globe and operate world over, adding that the airline has already signed a partnership agreement with a profile Aviation Tools Company with the aim to provide quality parts and equipment for the maintenance of all other Airbus Planes to arrive.

Addressing the newsmen during the welcoming event, the Assistant General Manager, Engineer Aliyu, said: “Today is indeed a marvelous moment for Azman Air, as we received our first Airbus 340-600 aircraft. Kano and Nigeria celebrates with you.”

“The arrival of this plane definitely marks the start of a new chapter in the development of not only Kano or the North, but the entire country as the increase seat capacity available on the aircraft, will enable Azman Air to continue delivering significant contribution towards both the growth of tourism and the economy of the country, what we call GDP.”

Sharing his excitement with the journalists, Sheikh Ibrahim Khalil said: “The arrival of “Airbus 340-600” marks an important milestone in the history of Kano and the entire country, today we are beyond proud to see the arrival of this beautiful plane in our dear state.”

The celebration was held around 9:00p.m was attended by the President of the Azman Group of Companies, Alhaji Dr. Abdul-Manafi Yunusa Sarina and other managing directors in the company, along with senior officials.

Nigerianflightdeck is an online news and magazine platform reporting business stories with a bias for aviation and travel. It is borne out of the intention to inform, educate as well as alter perceptions with balanced reportage.
Previous USAID, UBA sign MoU to advance Prosper Africa’s two-way trade; investment goals
Next NAHCO’s Chairman’s mother, Alice Fadeni released