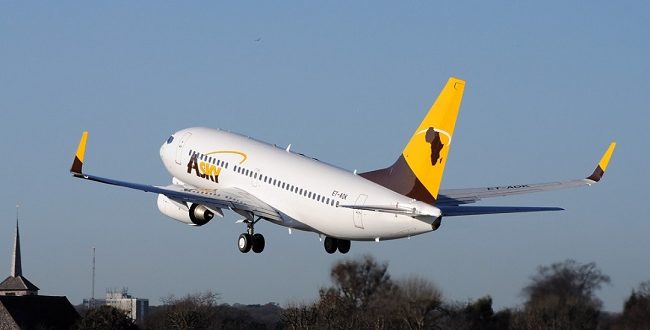 ASKY at the weekend   issued a reaction to the incident that happened with passengers and the airport security forces at the Lomé – Togo, International airport on Saturday 18 December 2021 which video is trending all over social media and generating ire.

The airline explained that for a few days, it had been trying to fix an IT system discrepancy problem that affected its Central Reservation System, which coordinates bookings on codeshare flights with its partner airlines and airport check in system.

This discrepancy, the airline said, affected some of its passengers with connection in Lomé airport going to Lagos from US operated flight Ethiopian Airline flight ET509, that their bookings were not found on the ASKY operated flight KP62 already fully booked from Lomé to Lagos on Saturday December 18th, 2021.

The statement read,”Some passengers became overwhelmed as their bookings were not found in the system, they blocked the security control area and transit area for other passengers and forced their way aggressively to the boarding gates.

“In this process they became physical with the agents and some police forces of the airport until additional support had to be called in for them to be restrained.

“ASKY management present at the scene assured the passengers to be calm as immediate arrangements were made to charter a separate aircraft to transport the passengers whose bookings were not found.

“All passengers finally got to their destination Lagos same day using the separate chartered aircraft.

The airline went on to apologize for the brutal treatment meted on the passengers and regretted that such an isolated incident happened between its passengers and the airport security forces.

“We assure everyone that the issue has been resolved to avoid any other further occurrences.

As a regional Pan African airlines our primary objective is to serve our communities and ensure that our passengers and their luggage get to their destination safely using the shortest possible time.

“This is therefore an isolated incident caused by a system discrepancy and corrective measures have already been taken to ensure this does not happen again.

“Once again, we sincerely apologize for the incident and do take this opportunity to extend our best Christmas greetings and prosperous New Year wishes 2022 to all our passengers, partners and stakeholders.

Nigerianflightdeck is an online news and magazine platform reporting business stories with a bias for aviation and travel. It is borne out of the intention to inform, educate as well as alter perceptions with balanced reportage.
Previous Arik Air explains de-boarding of unruly passenger from Asaba flight
Next New handling price regime: Five ground handlers sign compliance, implementation MoU to eliminate sabotage