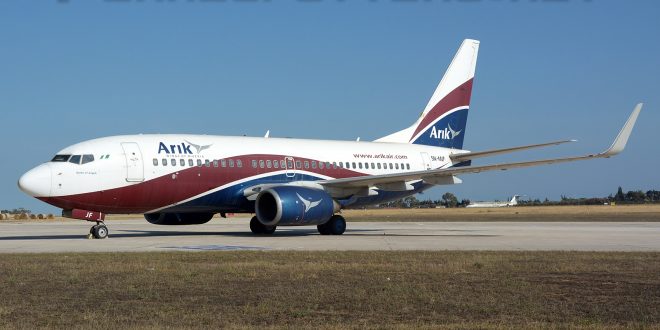 ARIK AIR has reiterated the fact that it would continue to pay priority attention to safety despite desperate motives of some disgruntled elements in the society to ridicule the efforts of the government to rehabilitate ailing airline which recently came under receivership due to gross mismanagement and heavy debt profile.

A statement by the airline read in part, “Irrespective of the enemies of the government and their resolve to transform the career, the management of Arik (under Receivership) is not distracted. Arik will continue to maintain the highest operational and safety standards, which the airline has been known for since its inception in 2006,”the statement further added that the takeover of the airline by the Asset Management Corporation of Nigeria (AMCON) and the appointment of a Receiver/ Manager has not in any way eroded the confidence of the flying public and all other business partners of the largest carrier in Nigeria.

According to the statement,  the new management team led by Captain Roy Ilegbodu, a veteran aviation expert with over 30 years’ experience, is more safety conscious than the former management of the airline that showed no regard to critical details that are needed to run a sensitive business like an airline.

Capt. Ilegbodu has worked at the highest level as a regulator when he served the Nigerian Civil Aviation Authority (NCAA) and had successfully managed at least two major airlines in the country, which is why he is well-regarded and respected in the airline industry.

It would be recalled that when the new Arik management team took over the affairs of Arik in February, they met a depleted fleet and 18 unserviceable aircraft, without a single spare part in the store, which is highly unethical and dangerous in aviation business. It was, therefore, only a matter of time for the few serviceable aircraft to be grounded. “We met an airline that was almost dead and our coming will go down in history as a real blessing,” said Captain Roy.

The statement added that none of Arik’s former management members can claim to be more experienced than Captain Roy in  aviation business.. Those who know his antecedents will testify to his professionalism and safety consciousness. As a matter of fact, he walks, sleeps and thinks safety all the time, which is why industry experts believe that Arik is headed to the path of recovery with him at the helm of operations.

Arik management also wishes to inform the public that the Maintenance/Engineering department of the airline is still alive to its responsibility of ensuring reliability, monitoring, original equipment manufacturers service letters and American Federal Aviation Administration (FAA), European Aviation Safety Agency (EASA) notifications, and ensuring that Arik Air’s fleet is maintained according to standards complimenting Airworthiness at all times.

The new management has ordered more aircraft spares, which have started arriving and in the coming days more aircraft will become serviceable and ready to join the fleet.

Nigerianflightdeck is an online news and magazine platform reporting business stories with a bias for aviation and travel. It is borne out of the intention to inform, educate as well as alter perceptions with balanced reportage.
Previous 5% TSC, CSC remittance: Airlines’ to face sanction as deadline end March 31
Next ASKY Airlines commences flights from Lagos to Johannesburg via Lome