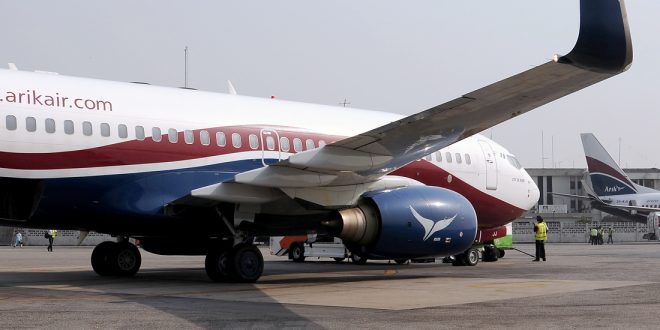 •Pilots embarked on action without recourse to procedure

ARIK Air, is reported to have sacked no fewer than eight local pilots all of whom refused to fly on Tuesday, December 21, 2021 following a letter issued to management to resolve certain safety issues, remuneration and shared concerns with regards morale.

The management of Arik Air (In Receivership) confirmed this action in a statement on Thursday stressing that it dismissed several of its Pilots for embarking on a strike action without recourse to lay down procedures.

The pilots had in a letter circulating had on December 16, 2021 wrote to Arik Air in Receivership for a meeting with the Receiver Manager, Mr. Kamilu Omokide who according to the pilots refused to see them or respond their letter for a meeting, instead writing to all staff that who wanted to resign should do so orderly.

The Arik pilots stated that they had Wrote Arik Air operations and crew control notifying themthat due to safety concerns they would be unable to fly until they are able to share their safety concerns with management, this led to the sack of the eight pilots for ‘gross misconduct due to abandonment of duty’

The letter read titled: Call for acknowledgement of safety concerns, clarifying the reason for the action which led to the dismissal,”After our letter to the Management of Arik Air in Receivership, requesting to see the Receiver Manager was not acknowledged, on Monday 20th December we wrote to Arik operations and Crew Control, notifying them that due to serious safety concerns, we would be unavailable to fly until we had the opportunity to share these concerns with the Receiver Manager.
“The issues in existence affect all staff, inclusive of drivers, cabin crew and even baggage handlers.

“All local pilots,were called for an emergency meeting scheduled 21.00 on 20th of December 2021. All local pilots attended this impromptu meeting and again requested a virtual meeting with the Receiver Manager as it was felt that it was best to share our concerns with the head of the company. During the meeting we were informed that the Reciever Manager was not interested in the meeting with us until further notice,due to his state of mind, whicvh we felt disregarded the seriousness of our request.

” We the local pilots assured the management that if we are unable to share our concerns with regards to morale, remuneration and the current safety issues in existence, with the appropriatecompany representative, then we will not be available to fly until this is remedied. Prior notice was given in order to avoid any flight disruption. On Tuesday 21st of december 2021 we acted as stated in accordance with our letter.

“Unfortunately, at 14.00 on Tuesday December 21, 2021, eight (8) local pilots were issued with dismissal letters stating that they had committed ‘gross misconduct due to abandonment of duty’ and that they were no longer employees with immediate effect.” The local pilots wrote.

Arik in its reaction to the pilots said,” The affected Pilots were dismissed for embarking on a strike action without recourse to lay down procedures.

“The Pilots did not serve a strike notice in accordance with labour laws. They neither submitted any issue of dispute to the National Association of Airline Pilots and Engineers (NAAPE), their umbrella union nor did they submit any statement of demands to the management of the company.

” There were also no ongoing discussions between the management and the Pilots on any unresolved labour issues. Their actions were spontaneous and callous.

“Arik Air finds it rather treacherous of the Pilots to contemplate a strike action at this Yuletide season which is the peak period for airlines all over the world. They peddle for naught the reputation and financial health of the company.

“It is instructive to note that the management of the airline has of late had very fruitful discussions with relevant aviation unions including the National Association of Airline Pilots and Engineers (NAAPE), on conditions of service for all employees. This has led to the signing of a robust condition of service and redundancy benefits for staff.

Nigerianflightdeck is an online news and magazine platform reporting business stories with a bias for aviation and travel. It is borne out of the intention to inform, educate as well as alter perceptions with balanced reportage.
Previous Awards, a challenge to NCAA not to fail- Captain Musa Nuhu
Next Fresh crisis looms as UAE set new stringent Covid-19 protocols, strands Nigerians