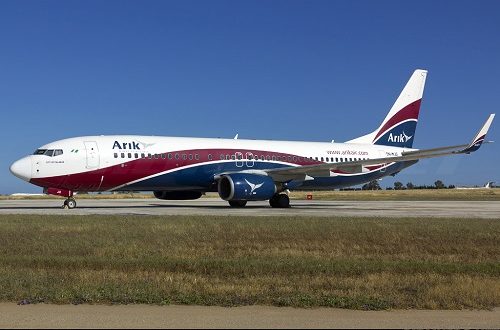 ARIK Air has today reacted to stories making rounds about its operations and describing them as unsafe while admonishing those who parade such information to verify the true position before declaring the airline’s flight to be unsafe.

A statement issued by the airline’s CEO, Captain Roy Ilegbodu stated that actions taken by the crew of the  Abuja March 8th , 2021 flight were strictly precautionary as the pilot took necessary safety measures by returning the aircraft to land in line with standard practice.

The statement read,”Our attention has been drawn to stories published on the social media claiming that Arik Air operations are unsafe following an incident last week.

“The incident referred to by the author of the article occurred in Abuja on the 8th of March 2021. For the records, the actions taken by the crew of the flight were strictly precautionary as the Pilot-in-Command of the aircraft took the necessary safety measures by returning the aircraft to land as they have been well trained to do in line with standard practice, after observing a cautionary indication light in the cockpit.

“Our aircraft are modern, next generation aircraft equipped with redundancies and annunciators that enhance safe operations in all stages of flight.

He went on, “Arik Air in line with standard practice and being a responsible corporate organization notified the Nigerian Civil Aviation Authority (NCAA), who subsequently checked, certified and returned to service the aircraft after all mandatory reports and processes had been fulfilled in accordance with global safety standards.

The airline berated the author of the article stating,”It is unfortunate that one R. Isenalumhe, a trained lawyer who raised the alarm displayed an unprofessional approach to this issue as he is not an expert to declare an aircraft unsafe. We had expected him to go the extra mile to investigate and ask probing questions from professionals in the industry or refer the incident to the appropriate regulatory body, the NCAA, if he felt so concerned about air safety.

“We wonder what his motive may be and Arik reserves the right to take action on this libelous and unprofessional conduct.

“Arik Air as an organization goes over and above safety standards in all facets of our operations. This is clearly evident in our over 14 years of operating as an airline. Safety is our cardinal policy and we will never operate an aircraft that is unsafe. We seize this opportunity to assure our esteemed customers of our unflinching commitment to safety which can never be compromised.

Arik has not made any repayments to the Asset Management Corporation of Nigeria (AMCON) on its pre-receivership debt as claimed by Mr. Isenalumhe. Neither has AMCON put any undue pressure on Arik for repayments at the detriment of operation. Instead, AMCON had provided funds and all forms of support to assist the airline in its operations,” he said.

Nigerianflightdeck is an online news and magazine platform reporting business stories with a bias for aviation and travel. It is borne out of the intention to inform, educate as well as alter perceptions with balanced reportage.
Previous NiMET DG sacked over alleged fraud, depletion of IGR without due approval
Next FG confirms Professor Mashi’s sack, appoints Professor Matazu new DG Nimet