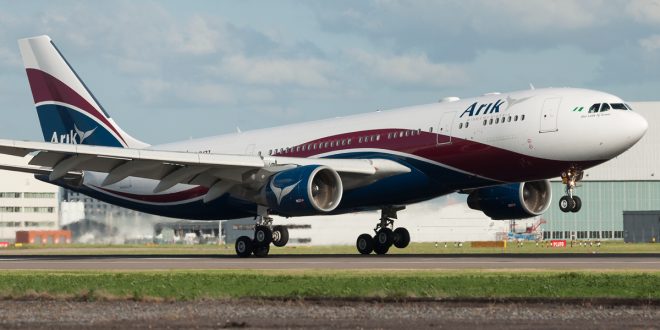 RECEIVER Manager of Arik Air, Mr. Oluseye Opasanya has said that the takeover of Arik Air by Asset Management Corporation of Nigeria (AMCON) is aimed at  rescuing, enhancing, and sustaining  the ailing airline’s operations to provide satisfactory service to air passengers.

This is just as he stated that AMCON plans to reach out to other creditors of the airline, both foreign and local in order to secure their co-operation and commitment.

Opasanya spoke in Lagos shortly after AMCON had announced its takeover of the airline.

He said AMCON having consulted widely with the federal government had appointed him to superintend over the affairs of the airline to sustain and improve its services while Capt. Roy Ukpebo Ilegbodu was made theTechnical Adviser/Consultant to the Receiver.

“AMCON will ensure that it supports the airline with people of great knowledge and experience to improve the fortunes of the airline,” he said.

Opasanya said he had earlier addressed the workers on the new development and the need to keep the airline flying.

He said Arik Air plays a pivotal role in the airline industry in the country.

“AMCON is willing to support the operations of Arik Air together with the support of the government to meet the essential needs of the company,” he said.

Opasanya added that AMCON would reach out to other creditors of the airline, both foreign and local in order to secure their co-operation and commitment.

“AMCON is willing to support the operations of Arik and together with government we will meet the immediate essential needs of the airline. We are aware that there is a need to reach out to other creditors both foreign and local in order to secure their cooperation and commitment of the business. I hope the media will convey these messages to the stakeholders that will enhance and not bring down the airline.’

He said AMCON’s mission was not to talk about the airline’s huge indebtedness but how to rescue it from total collapse.

“For now, I would prefer not to mention figures. The mission is to rescue the airline and if we begin to talk about the nature of indebtedness, the information may be harmful. Management believes in the commitment I have made and believe in the airline” he said.

However investigations show that Arik Air in indebted to the tune of over N139billion  to banks whose  loans AMCON bought over and this is not inclusive of government agencies, oil marketers, caterers, staff and other critical areas.

Opasanya said he had met with the workers and management of the airline earlier adding that through the media they would inform other stakeholders of AMCON’s commitment to keep the airline flying.

On the next step he would take, Opasanya said: “The next step is to run the business, make staff happy and keep the airline’s airplanes in the air.

Meanwhile, the deputy managing director of Arik Air, Capt. Ado Sanusi said the airline would challenge its takeover by the Asset Management Corporation of Nigeria (AMCON).

He said the airline had agreed to comply with the court’s order directing AMCON to take over the management of the airline, but the “airline will challenge the decision to the highest court in the land.”

“We might disagree on certain issues but we have agreed that air’s operations should continue and not be paralyzed.

“We will make our position known to our various stakeholders and partners; we will challenge this order to the highest level,” he said

Nigerianflightdeck is an online news and magazine platform reporting business stories with a bias for aviation and travel. It is borne out of the intention to inform, educate as well as alter perceptions with balanced reportage.
Previous Finally, AMCON takes embattled Arik Air over, appoints Capt. Ilegbodu Consultant
Next SAHCOL may lose N80million to Abuja Airport closure, says FG did not carry along stakeholders