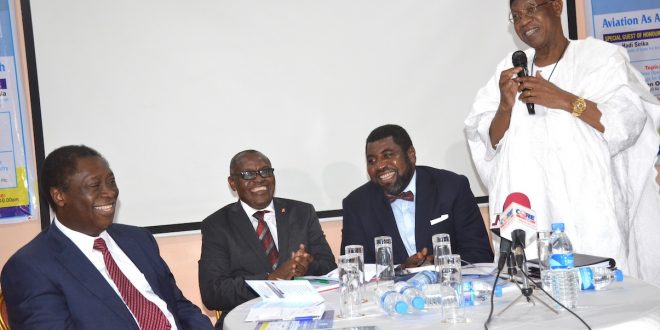 MINISTER of Information, Culture and Tourism, Alhaji Lai Mohammed today stated that the Presidential Directive on the Ease of Doing Business has been thus far successful but that people attest mostly to the ease of getting Nigerian visas because it is the most visibly seen.

This is just as Chairman of Bi-Courtney Aviation Services Limited (BASL), Dr. Wale Babalakin has stated that Nigeria is 50 years behind in development as the country has not grown.

The Minister who was guest of honor at the Aviation Round Table (ART) 2nd Quarter Breakfast Meeting said,” I think why people are talking about the visa on arrival I think it’s because it is the one they can see physically and they go through every day but clearly the executive order goes beyond visas on arrival.”

“it also has to do with incorporating businesses and today we can dispense with a lot of bureaucracy that we used to have that hinder fast registration of businesses. Even airport upgrading is part of the Ease of Doing Business and at the same time it encompasses what is going on at the ports today. Our goal is to enable anybody to clear goods within 24 hours,” he said.

He stated that the way the country was going about keeping agreements will repulse foreign investors especially as court orders and presidential orders are not adhered to.

Also speaking during the Breakfast Meeting on Investment Opportunity in Airport Development for Economic Growth, BASL Chairman, Dr. Babalakin stated that Volkswagen came into Brazil the same time as it did Nigeria but today Brazil now produces cars and even Embraer aircraft where Nigeria is still trying to stand.

He stated that aviation has not grown in Nigeria as those who started same time with the country had left it behind. Babalakin said aviation can be a catalyst for economic growth but doubted if the authorities are keen to make it happen.

“Aviation is a catalyst for economic growth it can be too but I am concerned whether we are keen on this happening. If we are keen, I am concerned if we have the skill to accomplish this. Since I have been knowledgeable, I have seen so many airlines come and go. Some celebrated and some are not but they have all come and go. Have we researched thoroughly the reason for the collapse? I used to hear the blanket answer it’s the military but I have discovered that the engine room of the military were civilians for the reason. I no longer find it convenient to say that it’s the military because the civilians there destroyed aviation.”

“I am not sure there is any component of an aircraft that is manufactured in Nigeria and certified. We import everything including the aviation fuel and we are exporting crude oil,” he said.

In his reaction, the minister of information, culture and tourism, Mr. Lai Mohammed acknowledged that “there are lots of challenges in the area of regulatory framework and policy making decisions.”

He however added: “If you don’t obey your own agreements, you will be sending wrong signals not only to your local community but also to the international community. People come here to invest because they want returns on their investment.”

Nigerianflightdeck is an online news and magazine platform reporting business stories with a bias for aviation and travel. It is borne out of the intention to inform, educate as well as alter perceptions with balanced reportage.
Previous Air Peace boss, Onyema says airlines are designed to fail from onset
Next Delta Air Lines reports $172m increase on June Quarter profit