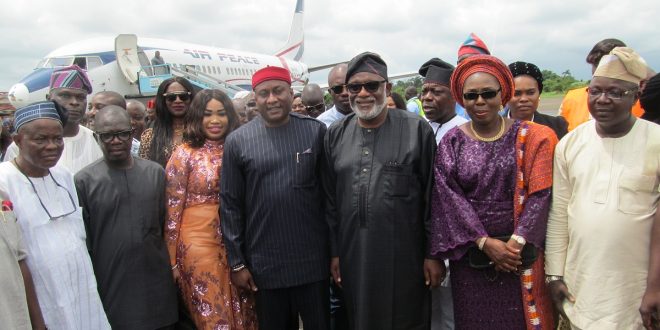 ONDO State Governor,  Rotimi Akeredolu (SAN) has commended Air Peace for the commencement of its operations into the Akure Airport, expressing confidence that this move  will stimulate industrial and technological growth as well as uplift the state economically.

He made this known earlier today as Air peace landed him in Akure stressing that the airline was bridging the gap and opening up the state to massive investment, exports and commercial activities.

The governor who harped on the airline’s viability to citizens of the state further called on them to take advantage of the airline’s services and cheap fares as it would help them avoid the hazards of travelling by road.

According to him, the N10,000 fare Air Peacewas charging was unbeatable thanking the chairman, Barrister Allen Onyema for his humanitarian services in the growth and development of Ondo State and Nigeria as a whole.

“When my Senior Special Adviser Investment started discussions with Air Peace I am sure he felt encouraged because of the sincerity of the airline and its CEO. the state thanks you (Allen Onyema) for your great work and decision to assist us.”

“We ask Ondo people to take advantage of the flight services of Air Peace from Akure to avoid the menace of kidnappers and armed robbers. They cannot reach you mid-air and now the facility is here so fly.”

Speaking earlier, Chairman of Air Peace, Barrister Allen Onyema stated that with the planned commencement of flight between Nigeria and China, the importance of Akure service commencement cannot be over emphasized.

He stated that the airline would act as a catalyst to the development of the state and assured that within months of direct flights between Nigeria and China and given the agricultural potentials of Ondo, economic activities will quadruple improving the state’s lot.

“To come here (To Ondo)is not enticing to any airline but we have to develop the country and open it up entirely and when we see visionary governments, people like me would come onboard and partner.”

” I know you have a lot here untapped. Ondo has a lot to give to Nigeria and the world and aviation as a catalyst,  the easiest, safest way to move forward as you have a governor who thought it wise to open the state to investors.”” We will be commencing China, Guangzhou and a lot of investors there want to come in and harness your potentials but road transport hinders economic activities in Ondo State but with Air Peace acting as catalysts, it would open.”

Nigerianflightdeck is an online news and magazine platform reporting business stories with a bias for aviation and travel. It is borne out of the intention to inform, educate as well as alter perceptions with balanced reportage.
Previous 41 Nigerians booted out of six European countries for immigration offenses
Next Arik Air migrates to Hitit’s full crane solution suite