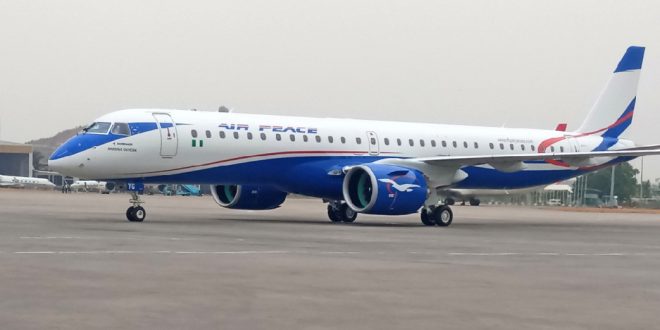 AIR Peace today took delivery of another of its thirteen (13) pre-ordered Embraer E195-E2 aircraft at the Nnamdi Azikiwe International Airport Abuja and has called on the Federal Government to impress on the Nigerian Customs Service ( NCS) the need to honour signed laws.

The brand new aircraft landed the country at 1:55pm and was welcomed with the usual water canon salute to the joy of many stakeholders who were on ground the receive the aircraft 5N-BYG christened Nnenna Onyema.

However while speaking on the arrival of the aircraft, Chairman of Air Peace, Chief Allen Onyema expressed sadness at what it takes to clear aircraft despite government signing into law the removal of Value Added Tax on importation of aircraft and spares.

Onyema who thanked the President, Muhammad Buhari for the gesture expressed dismay that customs was going contrary to the signed law and that is costing the airline more as the aircraft bought in is still on ground and amassing debt in insurance and other overhead.

“This president has done very well for the aviation industry by signing into law these demands that we presented to him. He didn’t waste time. It shows that the president is desirous and ready to support indigenous investments in this country. This is something that we are very proud of.

He continued,”I plead with the federal government to talk to the customs to try and feel the pulse of the president of this country and his regime. We must always do things that will reduce the name calling or bad-mouthing of a particular regime. The customs know very well that waivers have been signed into law yet I have an aircraft on ground for over one month, an aircraft I pay over one million dollars of insurance whether it flies or not.

“I pay over N490million with a staff strength of over 3,000 people, our spare parts and engines will come into this country and customs will keep on keeping them and giving us all manner of reasons and bills to pay, even through the president of the country in his wisdom has signed into law these waivers. It does not depend on the whims and caprices of anyone any more.

“This is the law of the country and the customs should be made to obey the laws of this country or in the next coming week airlines may shut down. If not for the minister of aviation, last week all the airlines in the country would have shut down. Where does that leave this economy of this country? Air Peace in particular, an engine which should be cleared in one day has taken over one month to clear. In the neighboring republic of Benin, it takes 48 hours to clear goods.

“The DG of WTO, Okonji Iweala talked about customs in this country yesterday facilitating business not killing business. The customs of Nigeria are not above the law. I must not be a prisoner of my own conscience. The customs must be made to obey the laws of this country. They are killing aviation. This government wants to help aviation. The minister keeps on intervening. They should allow airlines that are struggling for forex at N490 to a dollar. ”

He lamented the ordeal,”We are struggling to play safe and at the same time, we decide to yank off an engine which will not serve the interest of aviation and we brought in another engine but the engine has been with the customs for over one month. The engine involved was removed from here and taken back to the manufacturers to rectify something. The engine coming back is staying one month with customs. This is not a new import. So these things must be done to help aviation. Government agencies must not be vindictive but try to accept feedback.”

Nigerianflightdeck is an online news and magazine platform reporting business stories with a bias for aviation and travel. It is borne out of the intention to inform, educate as well as alter perceptions with balanced reportage.
Previous Yadudu appointed member ACI World Governing Board
Next NCAA puts the record straight on Azman Air suspension