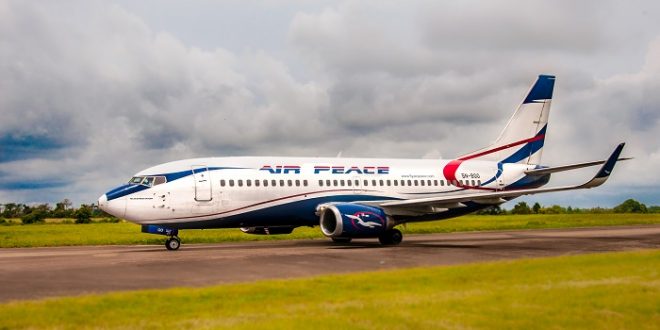 AN Air peace Flight P47291 with Registration marks 5N-BRN while landing at Port Harcourt from Abuja this afternoon skidded off the runway at the Port Harcourt domestic Airport wing, during a torrential rain fall.

The aircraft, according to sources, had onboard 87 and 6 crew members and all onboard were disembarked without injury or casualties.

We confirm that Air Peace Flight P47291 Abuja-Port Harcourt had a runway excursion upon landing at the Port Harcourt International Airport on June 22 due to downpour.

” Our professional crew quickly recovered within seconds of the incident and the aircraft was successfully normalized.

“Our esteemed passengers on board the flight were calm during the incident and disembarked normally.

“Our teams of experts and the authorities are currently reviewing the incident and we will give our cooperation for a thorough exercise.

“We apologize to our esteemed passengers for the inconvenience caused them and wish to assure them that we will continue to prioritize their safety in all our operations.”

Meanwhile, the Accident Investigation Bureau, Nigeria (AIB) says it has been notified of the Air Peace flight from Abuja to Port Harcourt Which it said had  94 passengers and 6 crew members on board with Registration marks 5N-BRN.

According to the Bureau, the aircraft skidded off the Runway to the left about 1300m from the Runway 21 threshold at the Port Harcourt International airport. All passengers and crew have been evacuated safely. Accident Investigation Bureau has dispatched investigators who are on their way to the site.

Nigerianflightdeck is an online news and magazine platform reporting business stories with a bias for aviation and travel. It is borne out of the intention to inform, educate as well as alter perceptions with balanced reportage.
Previous UBA GED recommends curriculum overhaul to equip graduates for tech evolution
Next 5th Accra Weizo 2019 Tourism Fair: Over 70 foreign delegates confirm attendance