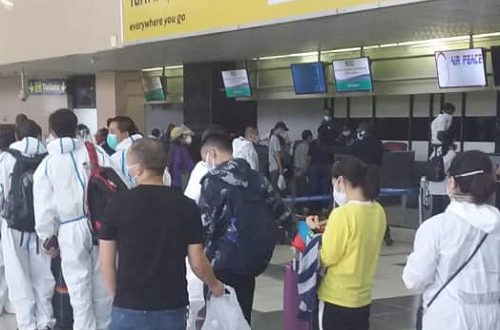 The airline carried out the evacuation with its Boeing 777-300 with registration 5N-BWI which airlifted 301 passengers on board carrying 24 crew members.

The Nigeria carrier was also the airline that evacuated Israelis living in Nigeria late March and has been contacted by other countries for evacuation operations.

Spokesman of the airline, Stanley Olisa confirmed the successful flight and said, Air Peace on Thursday, May 28, 2020, operated its second flight to China as “we evacuated 301 Chinese nationals back to their country. The flight departed the Murtala Muhammed International Airport Lagos at exactly 22:05hrs to Guangzhou Baiyun International Airport, China. Countries have been contacting us to evacuate their citizens.”

She explained that all relevant government agencies like FAAN, Nigeria Immigration Service, Port Health Services officials and others were fully on ground to success of the evacuation exercise.

Air Peace is slated to carry out more evacuation operations for other nationals living in Nigeria, as the airline and other domestic operators gear up to resume scheduled flight operations soon.

There are indications that commercial flight operations would resume early June, as the Nigerian Civil Aviation Authority (NCAA) has started auditing airlines in preparation for scheduled passenger service.

Nigerianflightdeck is an online news and magazine platform reporting business stories with a bias for aviation and travel. It is borne out of the intention to inform, educate as well as alter perceptions with balanced reportage.
Previous Onyema canvasses workforce-specific intervention as NCAA tinkers reopening domestic operations with 5 airports first
Next Evacuation: Aviation Committee demands authorities deny Titan Airlines landing rights