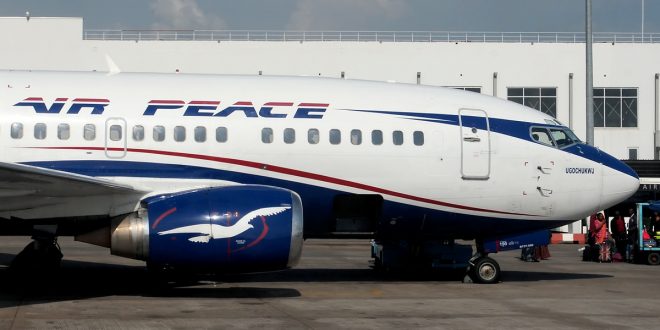 Share
AIR PEACE  has yesterday appealed to its passengers for the delay and cancellation of some its flights on Monday and Tuesday and has attributed it to a power surge at the General Aviation Terminal of the Murtala Muhammed Airport, Lagos, which cut electricity supply to its offices at the facility.
Air Peace has however normalised its flight services and assured passengers of safety and comfort while using the airline’s top-notch services
A statement issued by the Corporate Communications Manager of Air Peace, Mr. Chris Iwarah said the surge cut power supply to the airline’s server room and other facilities critical to its flight operations.
The airline, the statement added, had to resort to alternative arrangements to save its operations from entirely grinding to a halt pending the intervention of the managers of the facility, the Federal Airports Authority of Nigeria (FAAN).
The statement explained that despite the measures taken by the airline to salvage the situation, the incident occasioned a lot of delays and outright cancellation of some of its flights.
Air Peace appealed for the understanding of air travellers, assuring that it had taken steps to normalize its operations.
“Despite our best efforts to ensure smooth flight operations in the run-up to the yuletide, a power surge occurred at our base at the General Aviation Terminal of the Murtala Muhammed Airport, Lagos on Monday. The unfortunate incident, which stretched into Tuesday, cut power supply to our server room and other critical facilities for our operations.
“While the Federal Airports Authority of Nigeria (FAAN) was trying to fix the situation and restore power to the facility, we resorted to emergency measures to mitigate the impact of the incident on our flight schedules. Notwithstanding our efforts, the incident seriously affected our check-in and boarding operations and
occasioned a lot of delays and outright cancellation of some of our flights.
“We deeply regret the incident and solicit the understanding of our valued guests. While FAAN works to guarantee uninterrupted power supply to the airport, we will continue to work round the clock to normalize our operations
and sustain our on-time reputation,” the carrier said.
Meanwhile, management of Federal Airports Authority of Nigeria (FAAN) on Monday said it had restored power after  a minor spark that occurred at the Domestic wing of the General Aviation Terminal, Murtala Muhammed Airport at about 19:00hours.
it said its team of  engineers had since swung into action and power has been fully restored back to the Terminal and seamless operations have ensued and assured airport users of safety and security as well as apologizing to passengers, airlines and the general public for the inconvenience caused by this interruption.

Nigerianflightdeck is an online news and magazine platform reporting business stories with a bias for aviation and travel. It is borne out of the intention to inform, educate as well as alter perceptions with balanced reportage.
Previous NAMA tells airlines that navigational facilities are working optimally
Next Ethiopian Airlines’ success is premised on prudence and long-term planning- WoldeMariam Haliu