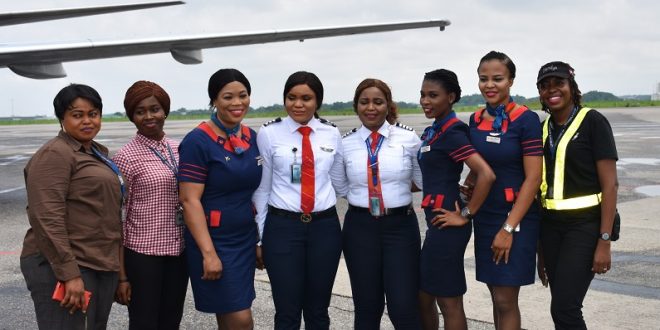 EXCITED passengers, enthusiastic government officials and aviation regulators on Thursday gathered en masse to celebrate Air Peace’s first all-female crew comprising Capt. Sinmisola Ajibola, Senior First Officer Quincy Owen, SEP Instructor Rosemary Uagbor, Cabin Executive Chidimma Chimezie and Cabin Executive Opakirite George in Lagos, Abuja and Owerri.
The all-female flight, which took off from the Murtala Muhammed Airport, Lagos, was operated days after Air Peace produced its first female Captain, Sinmisola Ajibola. The flights, the airline said, were in honour of Sinmisola, to promote gender equality in the nation’s aviation industry and project Nigerian women as capable of standing tall among both their male and female counterparts across the world.
The Boeing B737-300 aircraft with Captain Simisola in command and co-piloted by Senior First Officer Quincy landed at the Nnamdi Azikiwe International Airport, Abuja at 3.29 p.m. to a spectacular water salute performed by men of the Fire Service Department of the Federal Airports Authority of Nigeria and a rousing welcome by passengers, government officials, aviation regulators and other well-wishers.
From Abuja, the aircraft flew into the Sam Mbakwe Cargo Airport, Owerri and touched down at 6.00 p.m., receiving another plume of water salute and warm welcome from passengers, airport workers and well-wishers.
Other females involved in the operations were B1 Engineer, Justina Etim, who signed out the aircraft in Lagos and dispatchers Chisom Onyeakposi and Olubukola Olajiga. Ladi Amadu and Loretta Ekeh dispatched the flight in Abuja and Owerri respectively.
Speaking at a brief welcome ceremony for the flight crew in Abuja, Chairman/Chief Executive Officer of Air Peace, Mr. Allen Onyema said over 20 key positions in the airline, including those of the vice chairman, chief operating officer and chief of finance and administration, were occupied by women he insisted had demonstrated excellent capacity to deliver on their tasks.
The airline, he said, had employed about 2,000 workers since it commenced operations almost four years ago. About 1,500 of the employees, he confirmed, were women.
“Air Peace is an airline run by women. We are very proud of giving women opportunities to excel because we believe that there is nothing that men can do women cannot do. We want to encourage our female children that they should aspire to be whatever they want to be by emulating what our female flight and cabin crew members have done today,’’ Onyema said.
He commended the President Muhammadu Buhari-led administration for its support for domestic airlines. He hailed the president for the recent removal of Value Added Tax on transportation and waivers granted on importation of aircraft spares.
For his part, Minister of State for Aviation, Sen. Hadi Sirika, praised Air Peace for joining the league of airlines that had operated flights with only women in charge of the cockpit, cabin, engineering and dispatch.
The minister, who was represented by the Director, Safety and Technical Policy, Ministry of Transportation, Capt. Talba Alkali, said the feat had shown the airline was gender friendly.
He confirmed that Air Peace’s all-female flight was the first time a Nigerian airline was deploying a high-capacity aircraft like the Boeing 737 with only Nigerians in charge.
“Air Peace has made a tremendous impact on the industry and we as regulators and the ministry will continue to create an enabling environment for the airline and other domestic airlines to thrive. Today’s event is yet another testament of the safety of our airspace and we will continue to work with the airlines to make it safer,” Sirika assured.
The airline also won plaudits from the Director General of the Nigerian Civil Aviation Authority, Capt. Muhtar Usman and Managing Director of the Federal Airports Authority of Nigeria, Mr. Saleh Dunoma.
Usman and Dunoma, who were represented by Mr. Abiodun Adeyemi and Manager of the Nnamdi Azikiwe International Airport, Abuja, Mahmud Sani respectively, said they were proud of the great milestones the carrier had recorded since it started scheduled flight operations.
Speaking on behalf of the crew, Captain Sinmisola thanked Air Peace for giving them the opportunity to conduct the historic flight, adding that Nigerians should get used to having women in the cockpit.
“There are times we are boarding and the men will see me in the cockpit and they will behave like: ‘Is it a female flying us? Are we safe? And we laugh about it, because it is 2018. We expect people to be conversant with having females in their cockpits. But I guess we will give them a little more time to understand that what the men can do, we equally can do,” she said.
The US-trained pilot, who won the applause of passengers after each of the four landings she skillfully did, urged Nigerian girls to embrace their dreams without the fear of intimidation by their male counterparts.

Nigerianflightdeck is an online news and magazine platform reporting business stories with a bias for aviation and travel. It is borne out of the intention to inform, educate as well as alter perceptions with balanced reportage.
Previous Emirates to operate extra flights for busy Hajj season
Next PEBEC explains reason for report kiosks at MMIA, others