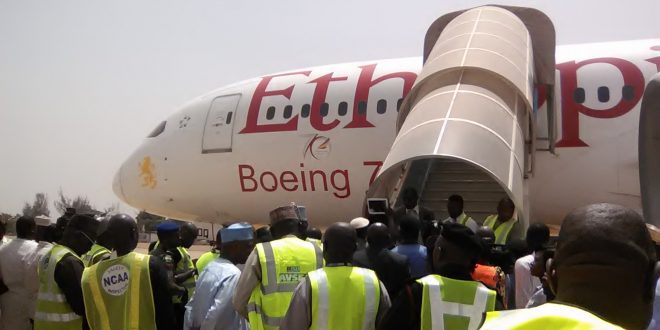 FOLLOWING the successful operations of Ethiopian Airlines into Kaduna Airport to kick-start services for the flight diversion, Minister of Aviation, Senator Hadi sirika has said that Federal government will strategically develop other airports in the country to bring them up to par in a bid to ensure that development goes round and forestall a repeat of the Abuja runway scenario.

Sirika who spoke  after the Ethiopian Airlines’ Boeing 787 Dream Liner was welcomed to a ceremonial water shower Wednesday in Kaduna, also expressed optimism that other foreign airlines will rescind after seeing what government has done to upgrade Kaduna

Ethiopian Airlines  had pledged to fly to Kaduna at a time foreign legacy carriers  rejected the option, citing security and logistic concerns and were even generous to admit that landing at the airport was done via top-notch navigational facilities of the Nigeria Airspace Management Agency (NAMA).

According to Sirika, it was a situation that was unfortunate but Federal Government was trying to make sure all the airports get due attention despite the funding challenges that sees aviation in competition with very critical sectors including education and health.

“What I  said is yes, we want to develop other airports but we will begin with the big four , Lagos, Kano, Port Harcourt and Abuja and then Enugu. We will add value and concession those once as for the others we will build value, create activities around them and also concession them but in-between now and then we will maintain them and improve them so whoever wants it to be concessioned to them will know we have added value to those airports so we can get more from them.”

“ We will not continue to see Benin without a fence, it’s a big security risk and others like that however all this is subject to the amount of money available to government because aviation is competing with critical areas like education, healthcare

The Minister also said that some foreign airlines were reconsidering flying into Kaduna.

According to him, Lufthansa might reconsider their decision but expressed sadness at the way Nigeria was abandoned in their time of need.

“My annoyance was that none of them came to Kaduna to inspect the airport to see what we have or don’t have. If they had done so, I would have provided for them what they need.

“If we divert flights to Lagos, I do not have the capacity to handle all the flights in Lagos. If all Abuja flights are diverted I do not have the capacity and therein we are taking the passengers one jet hour away or nine hours by vehicle so it had to be somewhere close. Even the foreign airlines, I asked them and none of them came to confirm the facilities if they had done so I would have provided them what they wanted.”

“ Ethiopia came and said your fire cover is Category 7 and it needs to be Category 9 and said your tower is obstructed and is not high enough we need a mobile tower and to prove we told them done.

Sirika added that the foreign airlines, however, came on March 1 to inspect the Kaduna and they saw all the work done.

“They saw the airfield lighting, they saw the ILS, runway markings and others we have done. They saw the general ambiance of the security, we erected the fence that went down and we have spoken to the villagers to ensure that they do not encroach, they saw what we have done and they said they will reconsider.”

“They saw all these and said they will reconsider, sending reports to their headquarters. Most of them have called us that they have considered. One of the airlines (Lufthansa) has said that they will begin next week, and if I get one more airline from Europe, then that’s it I am done.” he said.

Nigerianflightdeck is an online news and magazine platform reporting business stories with a bias for aviation and travel. It is borne out of the intention to inform, educate as well as alter perceptions with balanced reportage.
Previous Unions vow to tackle FG over ‘unqualified appointments’ in NCAA
Next Air Peace promises on-time departure as airline commences Kaduna ops