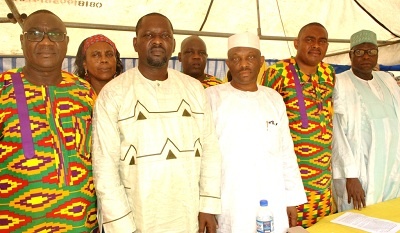 THE Airport Fire and Safety Cooperative Multipurpose Society (AFSCMS) has said it has been able to defray over 90% cost of its N500 million landed property it acquired at Agbara in Ogun state and has unveiled plans that its school and hotel projects will soon be put to use.

The newly elected president of the AFSCMS at the 19th annual general meeting, Alhaji Saheed Sadiq in his acceptance speech over the weekend at the Murtala Muhammed Airport, says the co-operative is also embarking on a vigorous membership drive nationwide in order to restore confidence and raise funds for members.

Sadiq revealed that the cooperative aims to raise its membership strength from the present 4000 to 6000 in 2020.

According to Sadiq, the new executive tagged ‘Team Change’ will ensure that those who left the Cooperative for one reason or the other will be made to come back to the fold and contribute their quota to the growth of the society.

He said their primary mandate was to meet the demands of members as at when due and pleaded with them to cooporate in the area of prevailing bye laws and implementation by fully complying.

Sadiq urged members with heavy loan requests on compassionate ground, to give the new executive six months to enable them stabilize in order to meet their demands.

The new president said he would consolidate on the achievements of the past executive to move the Cooperative to greater height.

In an interview with journalists earlier, Sadiq who was the former secretary of the cooperative under Richard Tella, said they achieved so much in the last executive saying that members were in for better times.

According to him, the Cooperative was able to defray over 90% cost of landed property at Agbara in Ogun state which was purchased for over N500m while the school and hotel projects will soon be put to use.

Sadiq noted that training and economic empowerment and pre-training of retirement members remained paramount adding that his executives will implement a robust plan.

He vowed to bridge the gap in communication between the society and the public which was noticed as a great challenge.

Nigerianflightdeck is an online news and magazine platform reporting business stories with a bias for aviation and travel. It is borne out of the intention to inform, educate as well as alter perceptions with balanced reportage.
Previous IATA’s visitation to FAAN, multiple awards and celebrations rule the week
Next FAAN doles out gift items to children arriving major airports in Nigeria