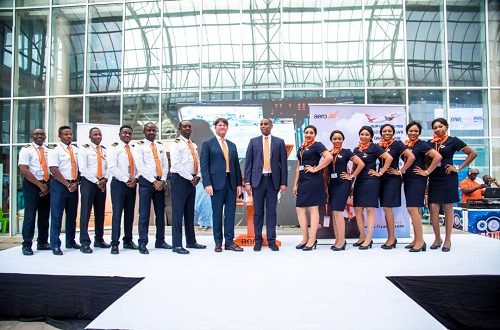 AERO CONTRACTORS, Nigeria’s oldest airline, has stepped up airline competitiveness a notch with fleet expansion, introduction of new routes, re-introduction of suspended routes and recommencement of its helicopter services in the Niger Delta and Gulf of Guinea region while celebrating the new face of the airline.

The airline enthralled passengers and the general public earlier today at its operational base, the Murtala Muhammed Airport Terminal 2 (MMA2), where it unveiled the airlines new face and its sustained direction at getting back.

Speaking on the trajectory of the airline in recent time, Chief Executive Officer, Captain Ado Sanusi said the celebration was in part also to unveil the new outlook of the Aero crew as well as the success story in the past 24 month of the airline.

Captain Sanusi who told reporters that the numbers in Aero was multiplying because of its trajectory explained that aero had gone from an 8,000 per month passenger traffic to over 34,000 with plans to improve on the figures once its commences its new routes.

“First of all, we celebrate the new face of our cabin crew of Aero contractors and we are unveiling the success we have achieved over the past 24 months, in the state of managing the airline. so the first thing we did was to unveil the new face of the cabin services and to also tell you we have opened new routes and reinstating those ones we suspended to serve our passengers better.”

” We are starting new routes and we are reinstating already existing routes that were suspended in the past. When I joined we started with eight (8) flights a day all centred around Abuja and Port Harcourt, however, in the past 24 months we have increased to over 30 flights a day. We were carrying close to 8, 000 passengers a month but now we are almost 32, 000-33,000 passengers a month,” Captain Sanusi said.

The Aero CEO said,”The routes we have included as we go are Kano, we introduced more frequencies into Abuja, Abuja-Asaba, Warri, Uyo and we are now in the process of introducing Yola. We will have Lagos-Yola and Abuja-Yola, Yola-Abuja and Yola-Lagos. This will open more routes for our passengers. Sokoto bound passengers going to Yola can come and join our Yola flight and those from Asaba can join our Yola flight. We are opening up Nigeria for our esteem passengers. We believe that by the end of first half of this year, we will have opened new routes in the Eastern part of the county. We are looking at Owerri and Enugu and it will come very soon. Uyo was there before, so we are reinstating it.”

On the availability of equipment to fly the airline’s proposed routes, Captain Sanusi said from the one aircraft met in 2017, the airline has grown its fleet through its home-grown Maintenance of its underserviced fleet and expressed plans to acquire more.

“We intend to bring in more equipment, at the moment we have to 737 aircraft that we are conducting a C-Check on and the others we have done making it a total of 16 aircraft and our aim is to be a 15 aircraft airline.”

Sanusi also said that Aero has increased its helicopter fleet from three (3) to Seven (7) with plans to make it ten (10) to enable it service the Niger- Delta region because of the Oil and Gas business thriving there, stating that the airline before venturing into commercial operations was chiefly a helicopter service which served that region as well as the Gulf of Guinea.

“We have entered into a joint venture with a Nigerian company to operate jointly their chopper. We have increased the number of helicopters we have in our fleet from three to seven and we intend to increase it to 10. Aero contractors used to operate over 30 helicopters out of the Niger Delta area and we were serving all the Golf of Guinea regions and we want to go back to that. We want to put our foot-prints to ensure we are a force to reckon with as far as logistics in oil and gas is concerned.”

Speaking on the change of crew raiment, Cabin Service Manager, Mrs. Kudirat Bello a lot of passengers were not too aware that Aero had returned full-scale and the airline needed to make a statement to the flying public that safe service delivery was back on the table by Aero.

” We just want to tell our passengers that we are back with increased fleet, new routes impeccable service delivery from our crew and we have also changed the accessories on our crew uniform to enhance the beauty.”

Nigerianflightdeck is an online news and magazine platform reporting business stories with a bias for aviation and travel. It is borne out of the intention to inform, educate as well as alter perceptions with balanced reportage.
Previous Training: Caverton set to acquire Thales Full Flight Simulator for AW139 in Lagos
Next Female pilots taking over the cockpit