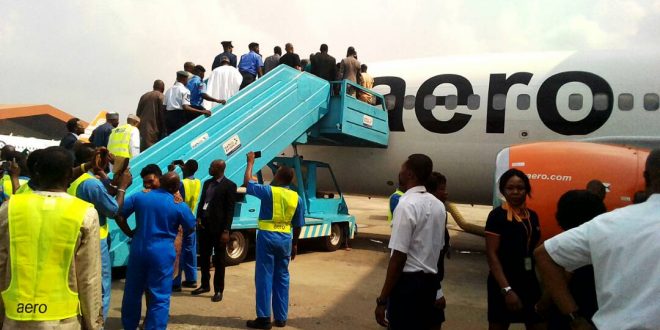 FOLLOWING huge capital flight experienced with regards aircraft maintenance, the country is set to save nothing less than US$90million dollars with the commencement of Aerocontractors Maintenance Repair and Overhaul (MRO) facility, given that the country operates no fewer than 30 Boeing aircraft.

Minster of State, Aviation, Senator Hadi Sirika who made this known during the roll out of Aerocontractors 737-500 aircraft from the hangar after the successful completion of a C-Check said the capital flight narrative is about to change with the organisation’s initiative.

A C-check is a detailed maintenance check where the entire component of an aircraft is inspected for the purpose of repair and maintenance. It is heavier than A and B checks and can take up to three weeks to conduct a C-check and require up to 6,000 man-hours.

According to the minister, Nigeria experiences huge capital flights of nothing less than $1.8million and $3million per Boeing aircraft on C-Checks.

“It is noteworthy that Boeing 737 aircraft are the most aircraft fleet operated in Nigeria by most indigenous airlines, prior to now and in the lifespan of other administrations. Nigeria experienced huge capital flight of nothing less than $1.8million and$3million per Boeing aircraft that left our shores for C-Checks and there are more than 30 of such aircraft operating so you do the arithmetic,” he said in his address.

According to the Minster, Aero was at the brink of being written off as history as another failed airline but the airline management dug deep and has turned around to make remarkable history as the first indigenous airline to undertake C-Check on Boeing 737 Classics.

Also speaking at the ceremony to mark the successful conduct of the C-check by the airline at Aero Contractors Head Office, Murtala Muhammed Airport, Lagos, Managing Director, Aero Contractors Airline, Captain Ado Sanusi, said the feat was necessitated by the need to maintain its aircraft locally.

Sanusi declared that the days where domestic airlines take their aircraft for maintenance abroad were over, stressing that conducting a C-check abroad amount to loss of huge capital flight.

According to him, Aero Contractors would be conducting the checks for all domestic airlines in Nigeria and across the West and Central Africa, affirming that the airline has bounce back to a profitable state.

In his words: “Right now, three of our aircraft are up for maintenance and for third-party maintenance, we have about six aircraft; so the entire years is busy for us because before the end of the year, we will have a full bay maintenance facility in the country”

“This feat is a game changer in the aviation industry for the entire country and it means that we can maintain our airplanes. We don’t have to take them out of the country. It will save us foreign exchange, turnaround time for maintenance and we can also do it according to international standards”

Speaking in the same vein, Managing Director, Asset Management Company of Nigeria (AMCON), Mr. Ahmed Kuru, said the certification given by the Nigerian Civil Aviation Authority (NCAA) to Aero Contractors to conduct C-checks on Boeing 737-500 series in the country would galvanize a boom in the aviation industry.

Kuru also stressed that it cost about $1.8million to $2million to conduct C-check outside the country, noting that such feat would save millions of dollars that Nigerian Airlines would have spent on maintenance abroad.

He said: “I would like to solicit the support for Aero MRO by all stakeholders particularly the relevant aviation regulatory bodies, towards ensuring that this seed that has been planted is allowed to grow, in our collective interest as Nigerians.”

“We cannot continue to allow capital flight of our scarce foreign exchange towards paying for services that are available in Nigeria and would provide a source of employment for our people. I would like to direct other airlines to use this facility as such would enable Aero MRO to grow towards conducting maintenance for other aircraft types”

The airline made history last week as it became the first Organisation to complete a C-Check of an aircraft in the whole West African region after the airline finished the C-Check of its own aircraft at the Aero Contractors hangar in Lagos.

The airline also completed a test flight on the 737aircraft which was completed by Captain Gabriel Ayeni with co-pilot Wale Awojebe and C-Check Manager, Engineer Claude and the crew.

Nigerianflightdeck is an online news and magazine platform reporting business stories with a bias for aviation and travel. It is borne out of the intention to inform, educate as well as alter perceptions with balanced reportage.
Previous UBA revolutionizes eBanking introduces chat banking personality on Social Media platforms
Next Arik Air says thanks to Nigerians for support, assures of a better 2018