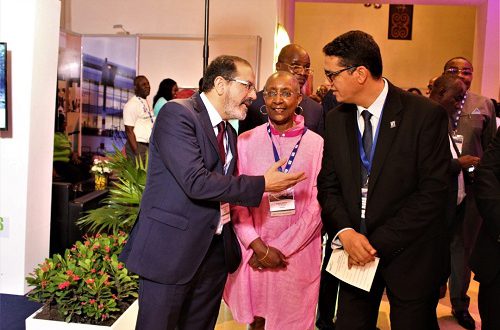 WITH the implementation of the Single African Air Transport Market (SAATM), the Airports Council International (ACI) has advised African Airports to embrace innovations that will help advance their performance despite state’s insistence for growth without corresponding infrastructure and investment.

According to Gittens, Africa has fast growing economies and with SAATM’s launch and the potentials of a common aviation market, the move will improve the socio-economic benefits while calling on the gathering to discuss how to find innovative solutions to some challenges bedeviling improvement in the region

“Africa is home to some of the fastest growing economies in the world and with the recent launch of the Single African Air Transport Market (SAATM) by the African Union, we can expect further improvement to open skies. The growing commitment to a common aviation market has the potential to alleviate existing regulatory strengths and among other factors advance connectivity in the continent. It also has the potential of increasing the socio-economic benefits that aviation and airports bring to the communities they serve.

“Considering the region’s potential for growth and its possible impediments, it has become more important than ever to foster a climate of innovation. In the spirit of no airport left behind, we need to consider solutions for airports big and small with different regulatory and operational realities, how can we help everyone to grow? Airports regions, at least in Africa are faced with the pressure of managing performance and growth without constantly adding infrastructure and cost while striving for environmental sustainability and robust security”, she said.

In a short presentation after, Airports Council International Africa (ACI-Africa) President, Mr Mohammed Zouhair El Aoufir explained that the African Development Bank and ICAO, has asked the ACI to conduct Apex review at 17 African Airports over the next 18 months, showing ICAO’s belief in the ACI-Apex review

He said, “Following an MOU signed with the African Development Bank and ICAO, ACI has been asked to conduct Apex review at 17 African Airports over the next 18 months, this is a testimony at the choice of ICAO and of all safety stakeholders of the value of ACI-Apex review

He also revealed that the ACI Board approved ACI strategic plan for 2020-2024 with the African Airports development program (AADP) filling the gap that usually exists in the aftermath of an Apex mission.

He said, “Pleased to announce the release of renewed of our ACI strategic plan 2020-2024 by our board two days ago, which sets our strategy direction for the next five years. This plan aims at positioning Africa as the only voice of African airports and the legal aviation association on the African continent. The plan has identified the main internal and external challenges of ACI-Africa and proposes a series of initiatives and actions to respond adequately, the growing and pressing needs of our members.

“With this plan, it is expected that ACI-Africa will be better positioned to support development of healthy, efficient, effective, safe, secure and sustainable air transport in Africa and contribute to the economic growth and prosperity of the region.

“African Airports Development Program (AADP) which is the new lead program of ACI-Africa and which is the main catalyst of our strategic plan. This program is the gateway of African support to confidentially achieve excellence in management, operations, capacity building to the chain of experience and expertise to the African continent

Reeling out the numbers, El Aoufir said that over the last 20 months, the AAD Program has provided 13 classroom training courses and 12 online courses in English and French to more than 340 participants from African airports from around 13 African countries.

He also said that during the same period seven (7) assistance missions have been conducted in 5 African airports under the program stating that,”…the AADP has been configured to compliment the ACI-Airport Excellence Program Apex review by providing the necessary assistance and support to those African countries to meet the challenges of addressing the findings of the review efficiently and sustainably in a bid to achieve certification and aim for safety and security.”

“AADP fills the gap that usually exists in the aftermath of an Apex mission,” he said.

Nigerianflightdeck is an online news and magazine platform reporting business stories with a bias for aviation and travel. It is borne out of the intention to inform, educate as well as alter perceptions with balanced reportage.
Previous MamaJ holds 3rd Aviation Careers Conference in Lagos
Next Sirika hands ICAO safety plaque to President Buhari as aviation sector is rated 96% Safe