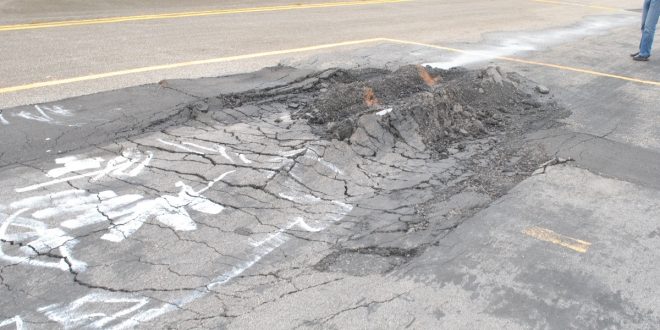 Bad portions of the Abuja runway

FOREIGN airlines seem to prepping over Federal Government’s March 8, 2017 closure of the Nnamdi Azikiwe International Airport (NAIA), Abuja as it would seem that some of them are making decisions before the closure takes effect.

It would seem that some of the said carriers operating into Abuja presently do not intend to continue operating into the country’s capital as there are no plans for some of them to operate from Kaduna, the airport designated for operations.

Nigerianflightflight.com learnt today that South African Airways (SAA) has already written a letter to the Minister of State for Aviation, Senator Hadi Sirika informing him that it would seize flight operations to Abuja on the 6th March, to days before the closure of the airport.

This is just as British Airways has said it would make its position known today (Monday) to the government on the directive to relocate flights to Kaduna Airport while Lufthansa German Airlines has already stopped selling tickets to Abuja while KLM-Air France has indicated that they will not be operating into Kaduna Airport.

Our correspondent cited a letter from SAA to the Minister signed by the Ag. Chief Commercial Officer, SAA, Mr. Aaron Munetsi, stating that the airline would suspend its operations to Abuja from March 6 until April 18, 2017.

The letter read in part: “SAA commends the Nigerian authorities concerning the planned repairs of the NAIA runway. However, due to network and fleet operations planning, SAA regrets to advise that the airline will suspend its Abuja operations with effect from 6th March until the 18th April, 2017.

“The airline promised to be in constant touch with the Nigerian aviation authorities as the repair work progresses in order to establish its readiness for revised operations in accordance with the work schedule.”

A source close to KLM-Air France also told our correspondent that the airline will not fly into Kaduna because according to the airline, there were no airline catering facilities in Kaduna that meets International Civil Aviation Organization (ICAO) prescription for international flights aside from the other known reasons.

Airlines like British Airways have also revealed that before the end of today, it would make its position known on operations into Kaduna or not while airlines like Lufthansa have already stopped sales of tickets to Abuja.

As at the time of publishing this report, Nigerianflightdeck.com is still awaiting a response from the Ministry of Aviation over the next steps if airlines continue to pull out and would update this story the minute that is sent.

A source who spoke anonymously said,”Airlines are looking out for what will favour them and Abuja is shut down, Kaduna might not do for us giving all that entails security wise and all. Agreed  government has promised security escorts for vehicular movements but in truth how feasible will this be and how can we put our passengers through that?”

Another carrier speaking through a media representative stated, “There are no plan to operate to Kaduna Airport by the airline. We will soon suspend our operations to Abuja and return to the airport once it is re-opened for flight operations. We don’t have any codeshare arrangement with any Nigerian airline at least for now.

“So, for those who have already book ahead, we will give them alternatives, which is either Lagos or Port Harcourt that we still fly into in the country. We will offer them ‘no fee booking option,’ which is the industry standards and if any passenger still doesn’t want to fly with .

The Abuja airport runway was constructed in 1982 alongside the commissioning of the airport. Rather than the industry standards of 20 years before total overhauling, the runway was in use for 34 years without any major repairs.

While it is closed, Abuja-bound passengers will have to fly to Kaduna and travel by bus to the capital, guarded by security, on a road where kidnappings have taken place in the past few years.

Nigerianflightdeck is an online news and magazine platform reporting business stories with a bias for aviation and travel. It is borne out of the intention to inform, educate as well as alter perceptions with balanced reportage.
Previous NCAA slams First Nation, pilot N33.5m over violation
Next Meridiana Fly, Dana Air partnership reaffirms commitment to Nigerian, Ghana market