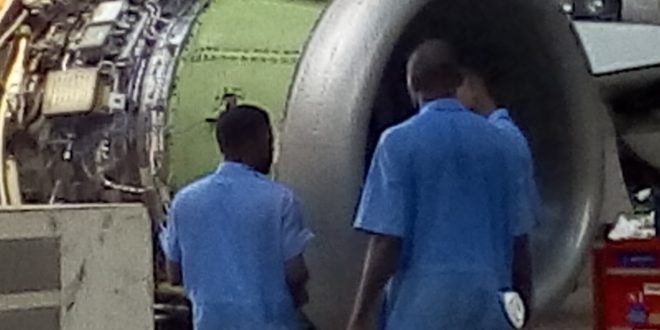 NEWLY formed Association of Aircraft Maintenance Organization of Nigeria (AAMON) says its raison d’etre protect investors in Aircraft Maintenance and Overhaul (AMO) and  demand government and stakeholders support so as to grow the business and reduce about US$1billion  capital flight expended by the country.

Chairman of AAMON and Accountable Manager of 7 Star Global Hangar Limited, Engr. Isaac David Balami who made this known said the new association would help provide employment, grow aviation technology which will lead to the manufacture of aircraft spares and eventually, manufacturing of whole aircraft.

Balami lamented that the total cost of aircraft maintenance in West Africa is over $1 billion annually and that Nigeria has the highest number of aircraft ferried overseas for maintenance and therefore expended about 75 per cent of the said amount.

“Indeed, Nigeria is not alone in the critical infrastructure deficit. He further stated that none of the West African countries has a MRO, conceding the MRO hubs to Johannesburg, Nairobi and Addis Ababa, Ethiopia – all of which have national carriers that are dependent on Nigerian market for traffic”.

He noted that over the decades, the aviation sub-sector in Nigeria had suffered because of its inability to establish proper Maintenance Repair and Overhaul facilities, a crucial infrastructure that ensures that the airline aspect of the business maintains a balance in its cost-intensity, stressing that With the emergence of new MROs in the country it is logical to look at areas of synergy to grow the budding market.

“When you talk about Nigerian airlines you are talking about West Africa because Nigeria is actually West Africa, whether you like it or not; and across the sub-region, over $1 billion is spent annually on aircraft maintenance and that is a fact. Nigeria contributes about 75 per cent of this expenditure.

“That is a huge capital flight. Those of us that are in the sector and in MRO business, feel frustrated about it.

“This is obviously a serious blow to Nigeria’s economy because I think that if the Aviation Ministry has $1 billion, you can imagine what they will do with it. So the point is that we must stop that leakage. It is not a matter of let’s try; we have to stop it. The private sector has to be involved because government cannot do it alone.

“Yes, there is 100 per cent interrelationship between cost of airline failure and cost of maintenance overseas. Asides aviation fuel, maintenance is the second biggest cost for Nigerian airlines and it is affecting our airlines badly.

“The issue is when you put Boeing 737 on the ground and it is not flying, you will be losing over $100,000 every day. This is because your fixed cost and your variable cost are known. You cannot change it because whether you fly or you don’t fly you will still do maintenance; whether it is after 500 hours, 1,000 hours or 18 months, whether it is D-check, whether it is C-check; that you are not flying does not mean that you won’t conduct checks on the aircraft,” he stated.

Balami identified high cost of maintenance overseas as the major reason why Nigerian airlines go under after a short period of operation. “Aircraft maintenance is determined by the calendar and cycles. So when you are not flying, you may not be getting the cycles, but the calendar is affecting it; so at the end of 18 months, you must do it.

“When you do it overseas you spend extra cost, including fuel cost, visa for your crew, allowances you have to pay, hotel accommodation and time you are going to spend. You are also going to pay for navigational charges. If you are going to the US, you will be losing about three to four days. You will stop and fuel. What you will spend on your aircraft taking them overseas will be enough to pay your staff for a certain period,” he explained.

On the struggle for homegrown solution, the AAMON President said both private and public efforts to revive the essential facility in Nigeria lately have not yielded the desired result.

He said the Akwa Ibom’s state government about three years ago completed its state-of-the-art MRO complex with the hope that both local and foreign investors will be attracted to complement it with more capital-intensive equipment and expertise. None he said has been seen till date as the hangar lies fallow.

However, Aero Contractors, early 2018, made a breakthrough in aircraft routine maintenance programme for Boeing 737 classics types.

The facility, domiciled at the Lagos airport, cuts the cost of overseas repairs by half. At the official opening a year ago, the organization already had aircraft on maintenance queue to last its engineers the entire year.

It was though a small facility compared to the huge demand, the effort again demonstrated that such investments are not beyond Nigeria, where there is a will.

Secretary of AAMON, Daniel Erin who is the Accountable Manager for DJSD Aviation Support Services urged the Federal Government to put proper policies in place that will allow local airlines to grow via homegrown MRO facilities.

Erin said no airlines could survive with fuel and sundry charges taking 60 per cent of revenue, while overseas maintenance and overhead compete for 40 per cent balance.

“That way, airlines are bound to go bankrupt. What policies have we put in place to support the local carriers? It all boils down to our policies. How far have we gone with MROs, a critical facility? What developments do we have now or aspiring for? We must be able to answer all these.

“We need to get our MRO plans off the ground and also increase the level of infrastructure at our airports. Let us give support to our local carriers with some forms of concession. It does not have to be bailout funds but basic concessions that give them comparative advantage over other foreign airlines that operate in our economy,” he said.

Nigerianflightdeck is an online news and magazine platform reporting business stories with a bias for aviation and travel. It is borne out of the intention to inform, educate as well as alter perceptions with balanced reportage.
Previous Heritage Bank shuts branch, disinfects over suspected coronavirus case
Next Ikechi Uko appointed member, Board of Trustees, FTAN