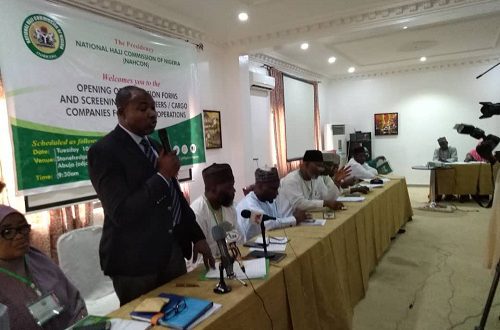 SEVEN airlines, including five Nigerian carriers and two Saudi Airlines, have indicated interest in participating in the 2020 airlift of Nigerian pilgrims to Saudi Arabia at the bid opening conducted by the National Hajj Commission of Nigeria (NAHCON).

At the opening of bidding, airlines proposed air fare for each of the passengers ranging from $1400 to $1900 while some of them slashed the fare at the venue with the fare proposed by airline for the South slightly higher than the one for the pilgrims from the Northern part of the country because of the closeness to Saudi Arabia..

Azman Air had initially quoted $1,800 for North and $1,850 for South but reviewed to $1,600 and $1,650 for North and South Respectively who proposed they have three aircraft dedicated for the service. Saudi Carrier FlyNas quoted $1,750 for South and $1,700 for the North stating that they will operate with two Boeing 747, two Airbus A330 and an additional back up aircraft.

Med-view Airline quoted its proposal at $1,600 for the North and $1,700 for the south stating that it has two Boeing 777s for the operations one owned by the airline and the other leased.

Also because of the incidents of failure to airlift pilgrims as at when due, which marred last year’s hajj, NAHCON decided to have dedicated airlines for licensed tour operators of which Westlink Air Services and Azman Air applied. Also Westlink which applied for International Pilgrim quoted a flat rate of $1800

Screening process is set to begin as the bid is done; this is where the data provided by the intending carriers would be verified. “Besides, the airlines would also sit down with our team to negotiate while the qualified carriers would be shortlisted. The commission will now forward the shortlisted airlines to the President for approval,” an official added.

The bid was also attended by representatives of the Nigerian Civil Aviation Authority (NCAA) and the Federal Airports Authority of Nigeria (FAAN).

Nigerianflightdeck is an online news and magazine platform reporting business stories with a bias for aviation and travel. It is borne out of the intention to inform, educate as well as alter perceptions with balanced reportage.
Previous Updated: FG rescinds decision to deny passengers without Yellow Card boarding
Next Sparing a thought for aviation development in Nigeria