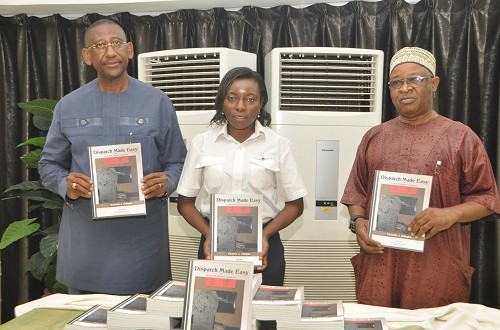 Share
Planning the smooth operations of any flight by checking the weather, deciding the safest flight path is a job most people ignore but quite an important link in the chain of safe flight operations, according to Licensed Aircraft Dispatcher and Ground Instructor with the Nigerian Civil Aviation Authority (NCAA) and the United States Federal Aviation Administration (FAA), Mrs. Victoria Adegbe

Mrs Adegbe made this known while speaking at the official launch of the book titled; “Dispatch Made Easy: An Aircraft Dispatch Handbook,” which she authored, noting that unknown to so many, the Dispatcher is the one who also takes into account, wind direction at destination or alternate airports, deciding on the amount of fuel to carry, the maximum baggage that can be safely airlifted, and advise pilots if conditions or paths change.

Mrs. Adegbe, therefore called on the Federal Government and industry stakeholders to accord more respect and awareness for the job of aircraft dispatch as a key profession in the sector that plays a crucial role in the safety and efficiency of any flight.

When asked why she embarked on writing such a book, the author said that during her training at the Nigerian College of Aviation Technology (NCAT), there were no books of this nature written by a Nigerian that she could refer to as a resource material.

Chairman of the occasion, Capt. Data Tarfa, Captain, Presidential Air Fleet/ Former Fleet Capt, Nigeria Airways, noted that the job of the Dispatcher and his role to the safety of a flight cannot be over emphasised.

He said the Dispatcher is the one who determines if an aircraft will be released for flight or not based on his assessment of all the necessary parameters required for safe operations. “This book is not only timely and useful for future generations, but comes as a challenge for many of us who were unable to put down our experience in a book like Victoria has done today,” he stressed.

The Managing Director of the Federal Airports Authority of Nigeria (FAAN) Engr. Saleh Dunoma, was represented at the occasion by the Director of Administration, Mr. ikechi Uko.

He commended Mrs. Adegbe for the brilliant work in putting together such a book in an easy to read, qualitative and informative manner. Similarly, Mr. Sam Onwutuebe, Operations Control Manager, DANA Air, said being a Dispatcher himself, he is proud of the effort made by the author and expressed optimism that this will contribute in no small way in transforming the profession form one confined to a room in an airline office to receiving the recognition it duly deserves.

In the Book Review done by Mr. Joseph Olotu, Base Operations Manager, Presidential Air Fleet (PAF) said, “Having spent six years within the halls and offices working shifts and odd hours, Victoria has gleaned sifted knowledge and garnered experience. Together with her passion for the profession, she has put together a good book with which to explain and broach the subject to amateur, professional and enthusiasts.” He added therefore that; “This book will go a long way in helping the public understand what processes are involved for any aircraft to take off and land successfully; for a Dispatcher’s duty is only completed when ALL his planes are safely back on the ground.” Corroborating his line of thought, Elder Gbenga Olowo, President, Aviation Safety Round Table & Sabre Travel Network, said; “There is no safe flying without a Dispatcher.”

Nigerianflightdeck is an online news and magazine platform reporting business stories with a bias for aviation and travel. It is borne out of the intention to inform, educate as well as alter perceptions with balanced reportage.
Previous Dana Air opens more points of sale in Accra
Next Retirement Planning: Stanbic IBTC Pension Managers intensifies campaign